Hoteliers suffer due to night curfew

Apoorva Diagnostic and Healthcare gets ICMR nod for covid-19 testing 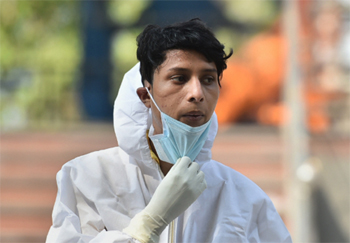 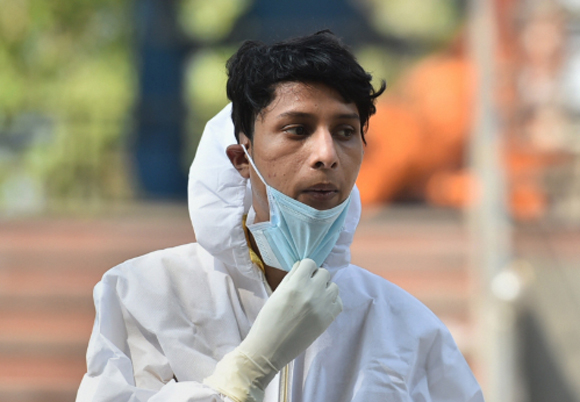 New Delhi, Jun 17: A class 12 student, aspiring to study medicine, has taken up the job of handling bodies of COVID-19 victims to provide for his siblings’ school fees and his mother’s treatment.

Chand Mohammad's mother suffers from a thyroid disorder and needs her medicines urgently, but the family does not have the means for the treatment.

“We are barely making our ends meet since my elder brother lost his job at a merchandise store in Krishna Nagar market during the lockdown,” the 20-year-old from Seelampur in Northeast Delhi says.

His family has been surviving on ration provided by neighbours and whatever little Chand’s brothers could earn doing odd jobs.

A week ago, Chand joined a company which deployed him as a sweeper at the Lok Nayak Jai Prakash Narayan Hospital here. The job requires him to handle bodies of those dying of coronavirus. The shift runs from 12 noon to 8 pm.

“I took the job after I exhausted all my options to find work. This is a dangerous job, as I am at a higher risk of contracting the infection, but I need the job.

“Our family, including three sisters, two brothers and parents, is struggling without money. Right now, we need food and medicines for my mother,” Chand says.

“Kayin din ghar me khana ek hi baar bana (On many days, we cooked food only once). There is a possibility that we may survive the virus, but we cannot escape hunger,” he says.

Chand says his three sisters are in school. He, a class 12 student himself, is yet to pay the school fee.

Chand hopes that his first salary will set things right to a certain extent.

“I offer ‘namaz’ before I step out of home for work. I have faith in the almighty. He will take care of me and show me the way,” Chand, who wants to study medicine, says.

But what bothers the youngster is that employees like him who are into high-risk jobs do not get any insurance from the private companies employing them.

“The most dangerous job in the world right now (handling bodies of COVID-19 patients) pays around Rs 17,000 per month,” he sighs.

Every day, Chand handles around two to three bodies along with another sweeper.

“We are required to put the bodies inside the ambulance, take it to the crematorium and put it down on a stretcher once we reach the crematorium,” he says.

“And, you have to do all this wearing the personal protection equipment (PPE), which is very heavy. It limits movement and suffocates a person. In this heat, you end up bathing in your own sweat,” he says.

On Tuesday evening, Chand handled a body on his own.

“I had no help. So, it took me some time, I was gasping for breath at the end,” he says.

"I heard a doctor saying the body had been lying in the mortuary for a month and that nobody claimed it. The person who packed it did not do his job properly. When I tried taking it down from the ambulance, the cover came off and some liquid spilled on my thighs," he says.

Desperate to get some money, Chand says he has approached people giving money on low interest rates.

"I took my Aadhaar card and voter identity card, hoping to get some money on low interest rates," he says.

Chand’s family is worried about his safety, but they are also aware that this is the only way for them to survive at present.

“My parents inquire about my work daily. They pray for my safety. My mother cries a lot, but I make her understand,” he says.

Chand adds he takes a bath as soon as he reaches home and keeps a distance from his family members.

“I have been taking all precautions, but we may never know what would happen. For now, I want some help so that the family remains afloat,” he says.

Very heart touching reality..YA Allah save him from covid and protect and finance his family for life long...

hats off to this boy coutage