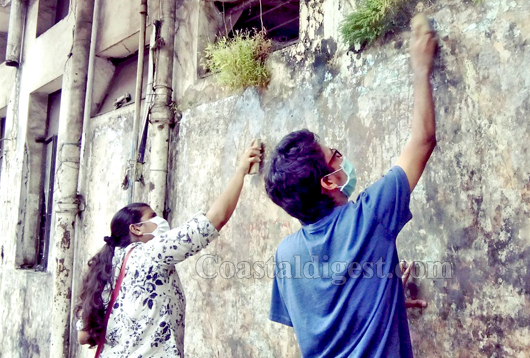 Mangaluru: Much before Prime Minister Narendra Modi'sSwacch Bharat' campaign gained popularity among citizens and organisations across the country, few groups of citizens have been quietly (and efficiently) doing their bit to beautify the cities and neighbourhood they reside by tackling the problem of garbage piles and messy corners in the public domain.

No activism, no talks, no preaching; only active cleaning. In other words, it is plain –Kaam Chaalu Mooh Bandh'.

With the intention to beautify Mangalore and its surrounding, a certain group of individuals from different spheres come together every Sunday andreclaim' public spaces – one at a time. The results are visible at various corners in Balmatta, Jyothi, Valencia, PVS Circle, Ladyhill, and several bus stops in the city.

Inspired by The Ugly Indian (TUI), which started as a citizen's movement in Bangalore city in 2010, the group of like-minded citizens, who wish to remain anonymous and unidentified, have taken up the unique initiative ofPoster Phaado' movement in and around Mangalore. As part of the initiative, the group collectively works to tear down ugly posters posted along the streets in the coastal city and give the walls acleaner' look.

Members of the group communicate through social media with the hashtag #PosterPhaado and notify volunteers willing to tackle the problem of dirty streets and dumping spots by involving in active work without complaining.

Armed with cleaning tools and theirKaam Chaalu Mooh Bandh', the anonymous citizens arrive at a designated time and venue, to get down toactive' work. One by one, they steadily pick filthy spots each week and indulge inspot-fixing', therebyreclaiming' the public space from garbage, litter or unwanted posters.

From their firstspotfix' at the historic Sultan Battery where they removed trash from the immediate surrounding and reclaimed the landmark site, to the weeklyPoster Phaado' events in Mangalore City Corporation limits, the group have so far “reclaimed” close to 30 public corners, bus stops, alleys and streets in a period of five months .

Apart from Sultan Battery which was visibly made cleaner thanks to the efforts of the volunteers, these spot-fixes range from bus stops at St Agnes (Bendoor), Bendoorwell, St Aloysius (Lighthouse Hill), Lady Goschen (Hampankatta), MG Road, Besant and Car Street to stretches of walls plastered with posters in other areas.

Speaking to Coastaldigest.com, one of the volunteers said that most of the spotfixes they achieve sustained themselves without much trouble. With a couple of spotfixes, the posters were back in the next week, which had to be removed again. The rest is upto the citizens themselves to use their civic sense and maintain the cleanliness of the reclaimed spots, he said, scrubbing the walls at Balmatta junction during their spotfix on Sunday.

Their Facebook page – The Ugly Indian – Mangalore Chapter has over 3,300 Likes till date with several ardent followers pursuing the activities of the volunteers with each post.

Looking at the efforts of the enthusiastic volunteers, one can hope Mangaloreans get better at their civic sense and inspire civilians in other towns to start their own spotfixing. Be the change you wish to see. 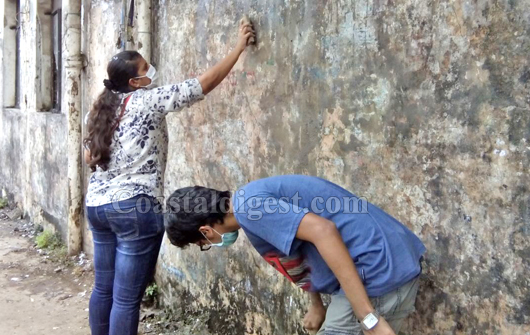 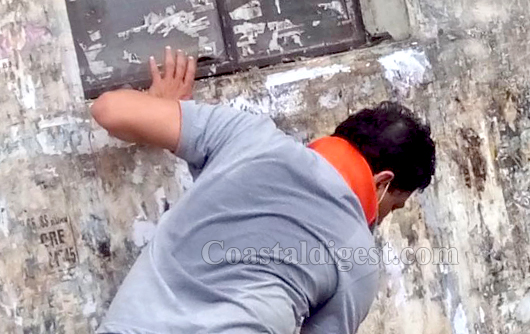 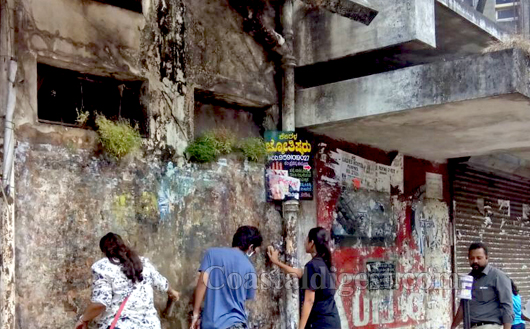 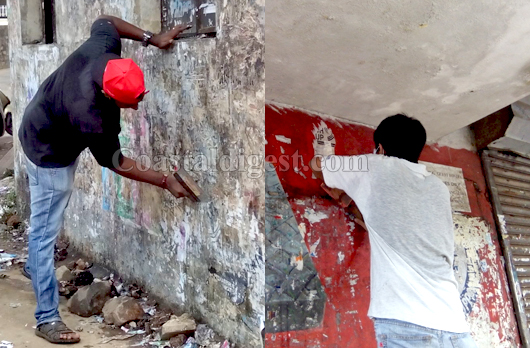 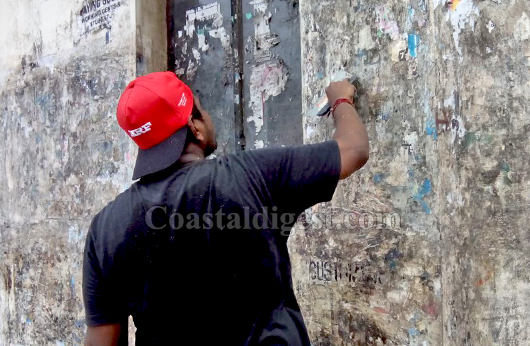 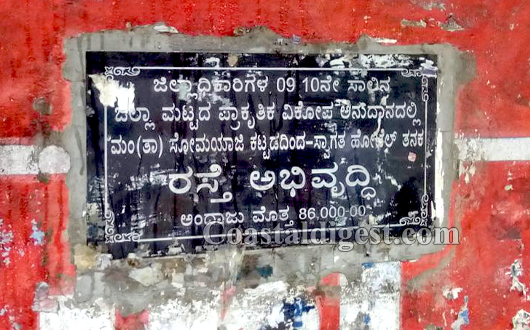 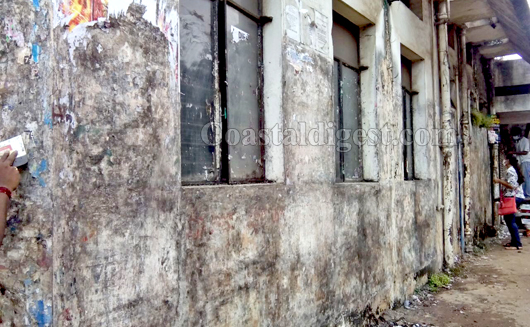 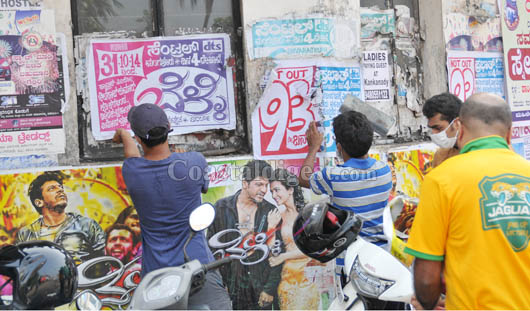 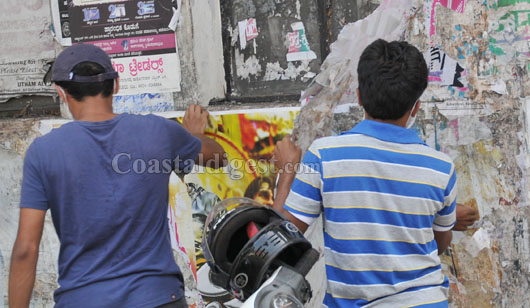 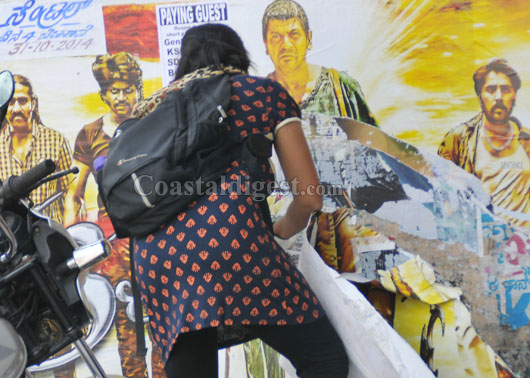 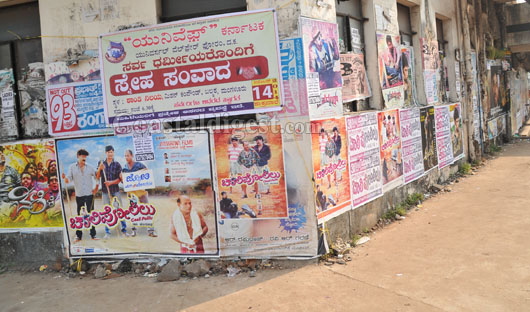 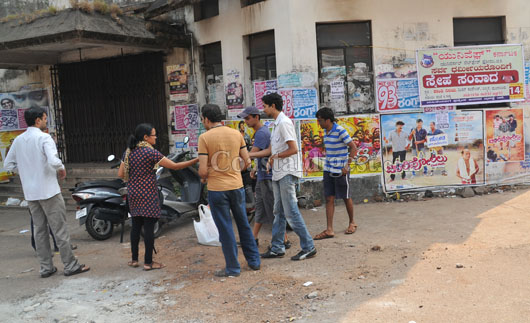 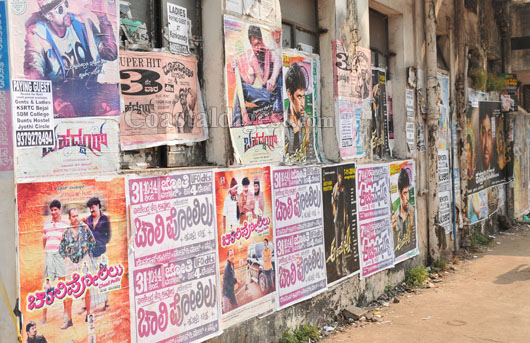 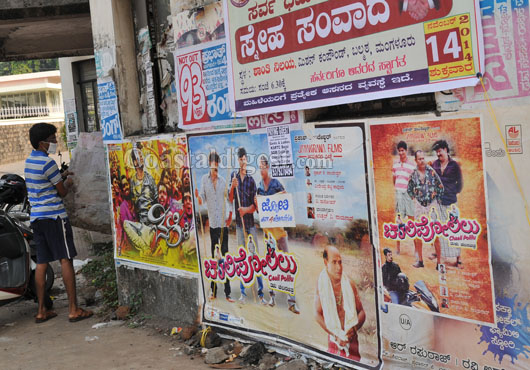 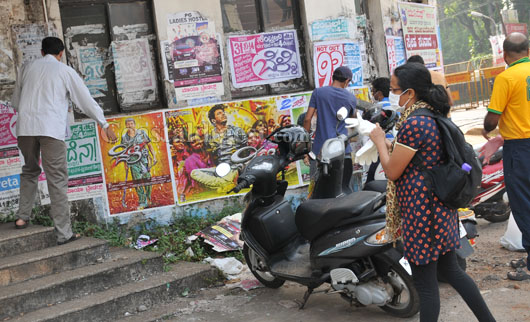 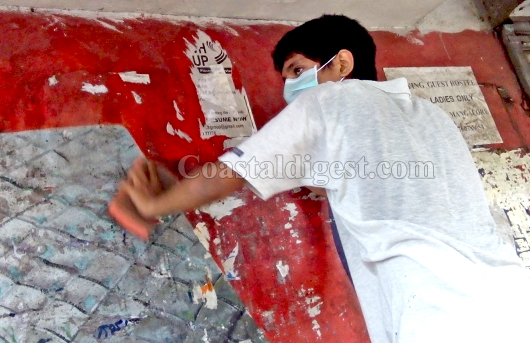