In search of Hindu Rashtra

I was surprised and shocked by a headline of the newspaper I read in one fine morning thatHindu Rashtra' got established overnight. The RSS supremo Shri Mohan Bhagwat was quoted to have informed the nation about this eventuality. I rushed outside into the street and then moved around the area to try to understand what would have actually happened to the nation. But, I was astonished to note that the life was as usual there and the people appeared as an epitome of an ancient saying “Kou nrip hamein ka”, means whosoever be the king we don't care (as they too do not care for us anyway). 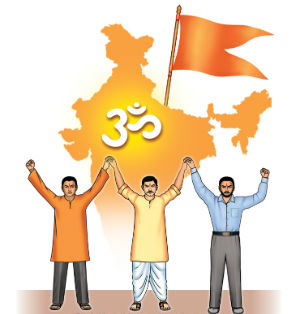 First of all, I considered the matter from the viewpoint of crimes against women. There appeared no new information on this front. Crimes against women are being committed with the same fervor; one atrocity on them by every three minutes, one rape by every 16 minutes and one dowry death by every hour. Madhya Pradesh, a strong basin of Hindu Rashtra, still leads as the most rape-prone state of the country with over 3,400 rapes of women and children a year.

Frustrated on being having noted no change as regards atrocities against women, I thought perhaps the situation regarding the so lamented “60 million missing daughters” would have changed overnight. But, unsurprisingly, the nation has upheld the same bias against the unborn girl child as before. There seems no change in the practice of and insistence on sex detection by ultrasound machines, use of infanticide to kill thus identified female embryos, humiliation of daughters-in law who give birth to girl child, blackened face of a father on hearing that he became father of a she-baby and consequently the usual prevalence of high girl-child mortality rate. There is no change in the fact that 20% youth of the country will find it difficult to have an exclusive partner within next two decades due to highly adverse sex ratio. Punjab, Haryana and Delhi still have around 500 women against 1000 men and people there are increasingly moving on the verge of reviving polyandry at mass level.

Then I anxiously thought, perhaps, the Hindu Rashtra would have changed the life of more than 60 million people who are destroying their own life by tending to become habitual drinkers and drug abusers, especially due to the government sponsored alcoholism in many states. There are still 2.5 million addicted drinkers dying in a year due to this menace, after completely devastating their families socially and economically. Alcoholism is still advancing in India with an exponential rate of 30% per annum. That means, by the time Shri Narendra Modi's presumed reign comes to an end as a leader of the so-called Hindu Rashtra after one decade, the number of alcoholics in the country will be already 180 million and alcohol-afflicted deaths will also become three folds or more.

Further reflection on these issues made me sad rather than shocked. In my arising opinion the advent of Hindu Rashtra is not going to alter the situation on these issues and my expectation from Shri Mohan Bhagwat's statement in this regard seemed wrong. There are people who venerate Indra in spite of the fact that he raped Ahilya the wife of Rishi Gautam. Therefore, the people who hold Indra's flag high can hardly resolve the present riddle of 25,000Ahilyas' who are reportedly being raped every year, besides those nine times more who un-reportedly face the curse. The nation which feels proud of pornographic idols of ancient caves will find it difficult to honor the dignity of woman. The philosophy that a person cannot attain Swarg without a son will go on tilt bias against a girl child. Those who justify drinking of Somaras by deities may feel unable to fight against the menace of alcoholism. There are obvious limitations of the so-called Hindu Rashtra in tackling these pressing issues.

Indeed, there are many contemporary issues where the establishment of Hindu Rashtra is going to alter nothing in common men's life. However, it is more likely to consolidate ancient aberrations rather than promoting any modern outlook on the basis of ancient wisdom. Mere proclamation of superiority of one section of people over others can hardly bring any change in Indian life. Rather, it will reinforce injustice and undemocratic system, something detrimental to the development and progress of the country. There is reason to appeal to Shri Mohan Bhagwat to come forward and lead the nation in fighting grassroots evils which are devastating life of millions of Indians ? the vast majority of them being his own co-believers ? rather than playing gimmicks with the proud Indians.

[The contributor is an author/editor of many books including his recent work “Islam in 21st Century: The Dynamics of Change of Future-making”]

In search of Hindu Rashtra