Report of the Islamic State of Iraq and Syria (ISIS) militants' killing of a captured Jordanian air force pilot by burning him alive, has sparked wide condemnations from Muslim scholars, community leaders and ordinary citizens across India.

The pilot Mouath al-Kasaesbeh was captured by the ISIS when he was on a bombing mission as part of the US-led air campaign against the extremist group and his F-16 plane crashed over Syria in December. 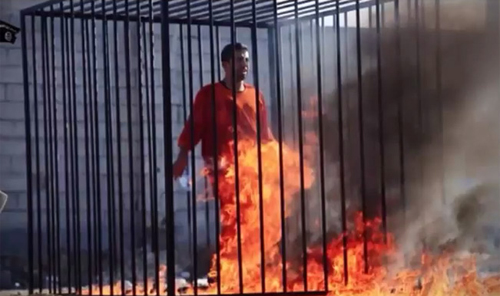 Last week ISIS released a video purporting to show captive Kasaesbeh standing inside a metal cage before being doused with a flammable liquid and set ablaze.

After the military sources in Jordan confirmed that the man who was burnt to death in the video was the Jordanian pilot, his horrific killing spurred an outrage in India as it did in the Arab world.

Rejecting the killing as a barbaric act contradicting with Islam, Indian Muslims across different levels called ISIS a “Satanic” group badly harming Islam and said that the militants themselves deserved to be slaughtered for the grisly crime of burning the pilot to death and other terrorist activities.

After angry reactions to the killing of the pilot began pouring in, an ISIS tweet claimed that Islam permitted an infidel's burning to death.

But several Islamic scholars said that the ISIS' claim is completely baseless and that it is misleading the masses in the name of Islam.

Islam is against burning of even an ant

Maulana Shafique Qasmi, imam of Kolkata's Nakhoda Masjid- eastern India's largest mosque, said that no words were sufficient to condemn the ISIS' “barbaric” way of burning the pilot to death.

“Even for a proven crime of severe sort Sharia law does not allow any convict to be burnt to death. What the ISIS insurgents are indulging in is sheer terrorism which has no place in Islam or humanity. Prophet Muhammad, peace be upon him, passed a strict advice to his followers never to burn a human with fire,” said Maulana Qasmi.

“We all know that Prophet Muhammad, peace be upon him, said to his followers that a believerremains within the scope of his religion as long as he does not kill another person illegally.' It's ridiculous if the ISIS terrorists call themselves followers of Islam.”

Chennai-based Muslim community leader Prof M H Jawahirullah said, acting in the name of Islam, the ISIS had gone hammer and tongs to act against the basic tenets of the religion.

“The burning to death of not only human beings for whatever reason, but also birds, animals and even a tiny insect like ant are Islamically forbidden. Burning a human being is a blatant disregard of the honor owed to him or her as per the divine will or will of Allah,” said Prof Jawahirullah, legislator in Tamil Nadu state Assembly and president of Tamil Nadu Muslim Munnetra Kazhagam (TMMK) political party.

“According to one of his hadiths (Abu Dawud, Sunan, No. 2673), Prophet Muhammad, peace be upon him, said to his companions that they had done it wrong by setting fire to a colony of ants. He said to them:No one is entitled to punish another by fire except it be the Creator of the fire (God)'.”

Prof Jawahirullah added that the ISIS has proved through their inhuman activities that they are enemies of God and Prophet Muhammad.

“It is the duty of every god-conscious Muslim to expose and nullify the IS who are none other than the modern day agents of imperialism,” he said.

Because of its series of criminal activities, ISIS has brought some troubles for Muslims in India, say some Indian Muslims.

“People in India are aware of all sort of criminal activities- like enslaving, raping and killing people that the ISIS insurgents are engaged in. Identifying ISIS as an Islamist group, as much as 98% or 99% India's non-Muslims believe that Islam approves of whatever criminal acts the group is indulging in,” said Haider Abbas, a Hyderabad-based social media activist.

“We the Muslims condemn ISIS for its un-Islamic terrorist acts. Yet, some non-Muslims believe that we support the group because we follow Islam, and so, they sometimes abusively label us as supporters of terrorism.

“It hurts me and many other Muslims when in the social media people attack our religion linking it to the ISIS.”

Mr Abbas added in a very angry tone that by burning the pilot to death ISIS had displayed an “extreme height of ruthlessness” and that they deserved to be “chopped to pieces”.

Shillong-based North Eastern Hill University professor Prasenjit Biswas says that it's unfair to attack Islam for the misdeeds of ISIS.

“Attacking Islam on some plea that ISIS has committed such and such brutality is like barking up the wrong tree. A perverted, demented and voyeuristic celebration of a messianic political theology of extermination by acts of terror neither has the sanction of any religion nor of any civilized covenants of war,” said Prof Biswas, who is also known as a social activist.

“Hence any attempt to desecrate fine tenets of Islam by citing IS undoubtedly is a debased justification for an ominous attack on Islam by fundamentalist bigot groups is worse than IS's bruteness.”