In the accidental explosion three men, who were making bombs in an underground makeshift workshop in Malda district of West Bengal state, were injured in October. 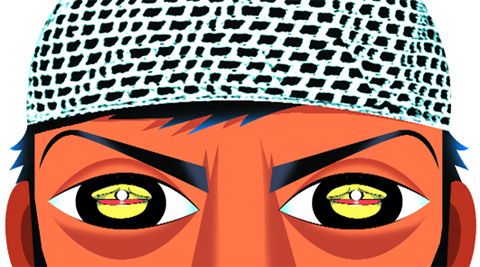 Since the bomb makers were identified by their names in the media and police reported that they were investigating if the Malda makeshift workshop was making bombs for use in terrorist activities, many in the Hindu-majority population of the state identified them as Islamist terrorists.

In another incident in Bardhaman district of the state, two men were injured, when a bomb they were manufacturing secretly, exploded in an accident on January 2.

Interestingly, barring a few Urdu newspapers- which are read only by Muslims, almost all of Kolkata's more than a dozen TV news channels and two dozen English, Bengali and Hindi language newspapers blacked out the news of the January 2 blast.

PTI and ANI- two Indian national news agencies reported the incident, but they did not identify the injured bomb-makers by their names.

But those who follow the Urdu media in the region knew that those who were injured in the Bardhaman blast were Goutam Mondal and Arjun Mondal- two Hindu men.

CNN-IBN was perhaps the only national TV channel which reported the Bardhaman incident and identified the two men by their names.

As did ANI, the CNN-IBN report noted that the police had immediately “ruled out any terror angle” to the Bardhaman case.

Noting that the bombs which were being manufactured at Malda and Bardhaman were meant for use by political parties, Social Media activist Mohammad Abu Bakr says, a big section of the Hindu-dominated police force is often biased against Muslims in terrorism-related investigations.

“Since those involved in the Malda blast case were all Muslims, soon police slapped terror angle to it and the all media organs enthusiastically aimed to identify the men involved in the case as Islamist terrorists. More than three months have gone by, but police are yet to announce that the Malda blast case had no terrorist connection. In sharp contrast, in the identical case of Bardhaman, within hours after the blast police highlighted that noterror angle' was found there,” Abu Bakr said.

Police knew well that in both cases some Muslim and Hindu men were manufacturing bombs for local political parties, for use in fights with rival parties, but only in the case of Bardhaman police chose to highlight that no “terror angle” existed there, apparently because of their view that no Hindu could be involved in terrorism, the social media activist said in an aggrieved tone.

“Even most newspapers, TV channels and online news portals took the pro-Hindu line of the police and chose to either black out the Bardhaman blast news or stay mum on the religious identity of the Hindu men involved in the case,” Abu Bakr added.

Sk Younus, a Kolkata-based online activist specialising in Muslim interest issues, notes that whenever something like the threats for apparent terror attacks land in, police being their investigation most often assuming that the Islamists are behind them and the media too follow the same line.

“As it happened in about a dozen cases across India in recent weeks, when some threats of terror attacks landed over phone, email and other modes in the name of some Islamist terror groups, police swung into action to hunt out theIslamists' and the media gave wide coverage to theIslamist threats'.

Some online Hindutva groups followed them up spreading an anti-Muslim frenzy across the society,” Mr Younus said.

“After a few days, as soon as the terror threats were traced to some Hindu men, the police announced that they were all hoax threats and that the men could not be terrorists.

“But in cases of identical threat calls Muslims have spent years in jail, as it happened to Ziauddin of Uttar Pradesh.”

A call from the mobile phone of Mohammad Ziauddin, a Muslim teenager in Lucknow, threatened to bomb a railway station. The boy who worked in a bag factory said that someone around him might have made the threat call in a mischief, using his mobile phone.

Ziauddin and his teenage colleague Mohammad Sartaj, another bag-maker, were charged for terrorist activities. The prosecution could not provide any evidence and they were acquitted of that charge in the court.

However, for the hoax call they were convicted as mischief mongers and spent 4 years and 8 months in jail.

Lawyer and human right activist Mohammad Shoaib, who defended Ziauddin and Sartaj in the court, said that he knew of cases in which Hindu young men had threatened terror attacks, but went unpunished.

“When following the threat call Ziauddin and Sartaj were apprehended, indeed the boys who stitched bags did not look like terrorists. Yet, the ATS (Anti Terrorist Squad of police) booked them for terrorist activities. But there are dozens of instances across India which show that police are usually soft to the Hindus committing identical offence- they were not even charged as mischief mongers after issuing terror threats,” said Lucknow-based Mr Shoaib, who is the president of Rihai Manch, a civil society forum that seeks release of innocent Muslim youths detained in terrorism charges.

“In most cases it was claimed that the (Hindu) men were mentally disturbed or had some psychiatric problems...and finally they did not face punishment at all.”

Last month, in an article in Caravan Daily news-portal, Mr Younus listed some cases of Hindus who had posed as Muslims and committed offences like threatening Islamist terror attacks and desecrating Hindu temples, but went almost unpunished.

Headlined “What's the Mystery of Terror Acts Being Claimed by Hindus Posing as Muslims?”, the article ends in an aggrieved tone: “It seems a Muslim can never bestressed, depressed or mentally unsound' — he can only be a hardcore terrorist!”

Social activists charge, a sizeable section of communally officials in police and other security agencies often let many Hindu offenders go scot free, while they many times slap false terrorism-related charges on Muslims who are petty offenders or even innocent.

Hyderabad-based online media activist Haider Abbas says that Indian government had virtually admitted that the security agencies were falsely implicating many innocent Muslims and it had directed the state governments to ensure that Muslims were not wrongfully arrested in terrorism-related cases.

Two years ago, in a letter to K Rahman Khan, who was then India's minority affairs minister, Sushil Kumar Shinde- then India's home minister, said that he was of the view that “arresting and keeping innocent persons in custody knowingly is indeed a serious offence”.

“Our government is committed to ensuring strong action against the officers responsible in all such cases,” Mr Shinde noted in his letter.

Mr Abbas said that the government did not keep its promise and the framing of innocent Muslims in terror cases is still continuing.

Social activist and former inspector general of police S R Darapuri recounts that during his days as a senior police officer he sometimes witnessed police actions in which his junior police officers were apparently biased against Muslims.

“Following terror attacks communally-biased police routinely arrest Muslim youths, often without any preliminary investigation, in a practice that in fact goes against the rule of the book,” said Mr Darapuri, general secretary of Rihai Manch.

“Ziauddin and Sartaj, who stitched bags, in no way appeared to be involved in terrorism. Yet, the investigators framed them as terrorists. In the court the terrorism-related charges of the prosecution fell apart. The case appears to be a glaring example of anti-Muslim bias among some security officials.”

Mr Darapuri added that proper vigilance by competent senior police officers can help curb such anti-Muslim bias among the juniors who mostly handle the terrorism-related cases on the ground level.

“Unfortunately, many senior police officers have failed to extend such vigilance over his juniors. And, to add to the woes of the Muslims, even courts are sometimes found to be biased against them, as is often reflected in the rejection of bail applications of the terror accused Muslims and slow trials.”