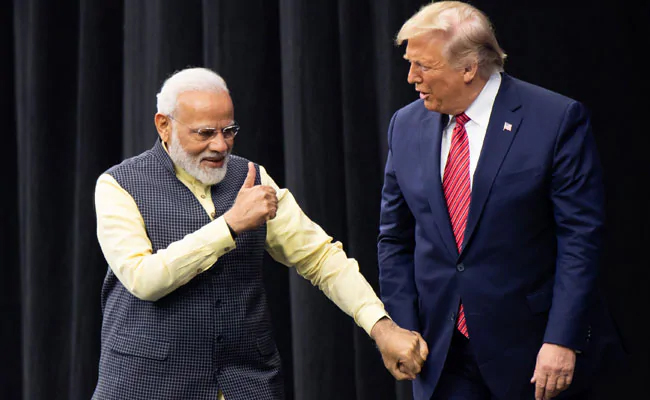 In Houston, America, a grand spectacle was created with Narendra Modi in presence of Donald Trump. The massive rally of nearly 50000 people cheered both the leaders. Both these leaders praised each other and criticized ‘Islamic Terrorism’ and Pakistan. It is true that the South Asia, West Asia have been suffering the cancer of terror, what is forgotten in the hysteria created in the name of ‘Islamic terrorism’ is the fact that the seeds of this terrorism were sown by the American policy, which not only had designed the syllabus for brain washing of Muslim youth, using the retrograde version of Islam, the whole exercise was funded by America to the tune of 8000 million dollars and seven thousand tons of armaments. The dreaded activity was programmed to fight the Russian army which was occupying Afghanistan. America in a shrewd manner deployed the products of terror training to its benefit and now is trying to wash its hands off the whole thing. As Hillary Clinton had pointed out “let them come from Saudi Arabia and other countries, importing their Wahabi brand of Islam so that we can go beat the Soviet Union.”

There are many sidelights of the gala event. The media is full of the massive response to the Modi event, while what was equally important and has been hidden. The protests by different groups, protests against policies of Modi in India have been ignored by media. In America while a substantial number of those from Indian origin are supporters of Hindu nationalism and many are Modi Bhakts too, there is a good number of those who are concerned about the state of human rights and health of democracy back home. Right from America, Bernie Sanders, the Democrat leader tweeted about Trump endorsing Modi overlooking the violation of the norms of freedom of religion and violation of human rights here in India. Sanders in a tweet said, “When Donald Trump stays silent in the face of religious persecution, repression and brutality, the dangerous message this sends to autocratic leaders around the world is: “Go ahead, you can get away with it.” In his long speech the central point of what Modi said was that ‘all is well’ in India.

Modi can say so despite the gross violation of basic citizen’s rights of large number of Indians, including those in Kashmir. His primary constituency is away from the ‘last man’, to focus on whom ‘father of our nation’ Gandhi had suggested for us. While the large section in the audience lapped everything which Modi said, large number of protesters outside the stadium did drew attention to the reality of Indian situation under Modi rule.

From among the protestors the most apt comment came from the Coalition of groups ‘Alliance for Justice and Accountability’. Sunita Vishwanathan, part of the alliance and member of ‘Hindus for Human Rights’, hit the nail on the head, when she stated “We are horrified that our religion, which teaches Vasudaiva Kutumbakam, (whole World is my family) is being hijacked by extremists and nationalists who are lynching Muslims, trampling democracy and law and order and arresting, if not murdering, those who are speaking out,…We are especially appalled by the most recent nightmare of the Kashmiri people and the situation of 1.9 million people in India who are rendered stateless due to the imposition of the travesty called the National Register of Citizens.”

One is at loss to understand the direction which India as a nation is taking at present, more so from last few years. While our Prime Minster is celebrating and addressing the rallies in America the Indian economy is taking a nose dive. Lakhs of workers are being retrenched; the average people are feeling the pinch of the policies being pursued by the Government in power. These policies do not want to solve the problems average people of the country. As such last few years have seen a total change in the pattern of issues being brought to fore by BJP led Government. It has gone on to give importance to issues like abolition of triple talaq, abrogation of Article 370, focusing on NRC in Assam while there is a talk the air that NRC will be extended to the whole of the country and Uniform Civil Code will be, implemented.

The central focus of the policy making and concerns of the ruling Government has seen a drastic change. In the initial years of republic, solid foundations of industries, Universities and irrigation system were laid. The idea was this is what the nation needs; focus on issues related to livelihood. There were many weaknesses in the planning and implementation of these policies, but the direction was right. This did lead to improvement in levels of literacy, health related indices, economic growth, agricultural production, milk production to list the few.

The identity issues like Ram Temple or Holy Cow-beef, Conversions, love jihad were on the margins. Not influencing the direction of the policy making. With such a focus on infrastructure, India became global economic power. Now the nation’s track has been shifted away from the role of India as a guardian state focusing on basic issues of people, to the one which just makes claims to have welfare schemes, but in reality is withdrawing from responsibility in the areas which are the dire need of the vast sections of society.

After the launch of Ram Temple campaign BJP started emerging and claimed that it is ‘Party with a difference’. It is true. This is the party guided by the agenda of Hindu nationalism. Such Religious nationalism thrives on issues related to identity, hatred for religious minorities. It creates violence and polarization. It is this polarization which gives electoral strength to religious nationalist parties all over, BJP, in case of India. In the din of hysteria created by Howdy Modi type events how to bring the national focus back to the problems faced by average people of the society is the question staring us in our face.