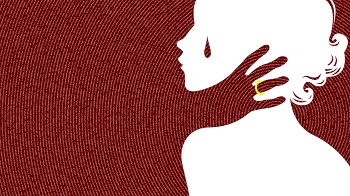 Palanpur, Nov 7: In a shocking incident, two blind teachers - one of them 62-year-old - have been accused of raping a 15-year-old blind girl several times for nearly four months in a school run by a private trust in Gujarat’s temple town Ambaji.

The teachers were booked after the girl narrated her ordeal to her aunt when she had gone to her native Premnagar village of Patan district's Radhanpur taluka for Diwali vacation last month.

The family members got curious when the girl refused to go back to the school after vacations got over. She broke down and described how she was sexually assaulted by the two teachers - Chaman Thakor (62) and Jayanti Thakor (30).

After studying up to Class 8 in her native village, the girl had taken admission in the school to learn music in July to learn music. The school also imparts rehabilitation and vocational training to the differently-abled students. She was living in the school's hostel.

According to the complaint lodged by the girl's aunt on November 4, the minor was first raped in the music room by Jayanti Thakor two months ago. After three days, Chaman Thakor too allegedly raped her in the same room. It is alleged that Jayanti again raped her on the day before Navratri festival was to commence.

The girl said that the sexual assaults stopped only after she revealed her trauma to three other teachers of the school.

Police inspector, Ambaji, JB Agrawat, said, "We are investigating the case in detail and a manhunt has been launched to trace the two accused teachers who have fled."

Jayanti is a native of Bhabhar town of Banaskantha while Chaman lives in Gadh village near Palanpur. Both were dismissed by the school management after the complaint was lodged. Sources said that the institution is around five years old.