Passenger impersonates octogenarian to go to US, held 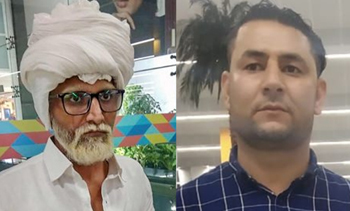 New Delhi, Sept 11: The 32-year-old man, who was apprehended at the Delhi airport for allegedly impersonating an octogenarian passenger by using a fake passport, wanted to go to the US for employment, police said on Tuesday.

The accused, identified as Jayesh Patel (32), a resident of Ahmedabad in Gujarat was arrested on Sunday, they said.

He had coloured his hair and beard white and arrived in a wheelchair to board a flight to New York from the Indira Gandhi International Airport on Sunday allegedly using a fake passport with the name of Amrik Singh, aged 81.

The passenger looked suspicious to Central Industrial Security Force officials on frisking duty as he expressed his inability to stand up from the wheelchair and was evading eye contact with them, police said.

The man was put through detailed checks, following which his original identity was revealed after he was arrested and handed over to the police who have booked him under relevant sections of the Indian Penal Code and 12 Public Premises (PP) Act, they said.

"During interrogation, Patel revealed that around six months ago, when he had apprehensions that he would not be able to get a US visa, he discussed his desire to go abroad with a woman in his neighbourhood who asked him to connect him with an agent," said Sanjay Bhatia, Deputy Commissioner of Police (IGI Airport).

Patel, along with his father, met the agent at a parlour in Kalol area of Ahmedabad. The agent assured him to arrange fake documents and send him to the US. After some time, the agent called Patel at a hotel in Delhi's Karol Bagh where a makeup artist was arranged, the DCP said.

The makeup artist changed Patel's appearance, making him look like an octogenarian. He was provided with a passport in the name of Singh, a resident of Delhi. The agents also arranged visa and dropped Patel on a wheelchair to the airport on Sunday, Bhatia said.

The agent had also advised Patel to remain seated on the wheelchair at the IGI Airport to avoid the attention of the security personnel but he ran out of luck and was caught during security frisking, police said.

Police have initiated a manhunt to trace and nab the agents and sub-agents. Police teams are investigating the modus operandi to procure the fake passport, fake address and fake name, they added.

Passenger impersonates octogenarian to go to US, held