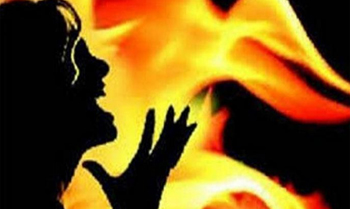 Rampur (Uttar Pradesh), Sept 19: A woman and her three-month-old daughter died after they were allegedly burnt alive by her in-laws over demand of dowry in Rampur`s Hajipura mohalla on Wednesday morning.

Mohammad Javed, the brother of the victim, said that his sister was married four years ago. "She had a 3-year-old son and daughter 3-month-old daughter. She was living in her father`s house after her in-laws forced her for dowry. They used to torture her and they called her at home on Wednesday morning and burnt her along with her daughter," he said.

He added that her sister`s in-laws did not inform them about the whereabouts of Shabnam and her daughter. They got to know about the incident from neighbours.

On Javed`s complaint, police have registered a case.

Superintendent of Police Ajay Sharma said: "A dowry and murder case has been registered. The investigation will be done on the basis of circumstantial evidence. Efforts are on to nab the accused."

The bodies have been sent to the district hospital for postmortem.