New Delhi, May 7: Cyclone Fani - the strongest tropical cyclone to hit the country in two decades - wreaked havoc in Odisha and claimed at least 34 lives, with several more feared dead. As the state struggles to return to normalcy, Akshay Kumar has stepped forward to help. 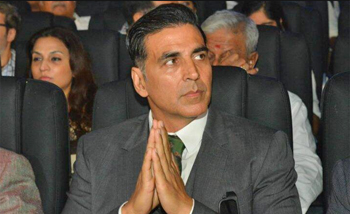 According to a report in Hindustan Times, the actor has made a donation of Rs 1 crore to the Chief Minister's Relief Fund to help the victims of the deadly Cyclone Fani rebuild their lives.

"This is not new. Akshay has always been contributing for causes, be it his Bharat ke Veer initiative for the armed forces, or his contribution to the Kerala Floods or Chennai floods earlier," a source told the publication.

The newspaper tried to contact the Chief Minister of Odisha's office for a confirmation but did not receive a response at the time of going to print.

Cyclone Fani hit Odisha on Friday (May 3), causing massive damage and leaving the coastal state grappling with water shortage and power cuts. At least 34 people were killed, including 21 from Puri district.

The Centre released Rs 381 crore for the assistance of the cyclone-ravaged state, with Prime Minister Narendra Modi announcing an additional fund of Rs 1,000 crore for providing relief to the affected areas.