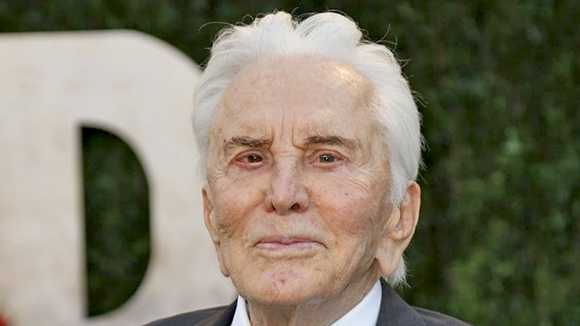 Los Angeles, Feb 6: U.S. silver screen legend Kirk Douglas, the son of Jewish Russian immigrants who rose through the ranks to become one of Hollywood's biggest stars, has died, his family said Wednesday. He was 103.

One of the last survivors of the golden age of cinema and the father of Oscar-winning actor and film-maker Michael Douglas, the Spartacus actor was renowned for the macho tough guy roles he took on in around 90 movies over a six-decade career.

"It is with tremendous sadness that my brothers and I announce that Kirk Douglas left us today at the age of 103," Michael Douglas said in a statement posted to Facebook.

"To the world he was a legend, an actor from the golden age of movies who lived well into his golden years, a humanitarian whose commitment to justice and the causes he believed in set a standard for all of us to aspire to."

Douglas was Oscar-nominated for his roles as a double-crossing and womanizing boxer in Champion (1949), a ruthless movie producer in The Bad and the Beautiful (1952) and tortured artist Vincent Van Gogh in Lust for Life (1956).

But his only Academy Award came in 1995 -- an honorary lifetime achievement statuette "for 50 years as a creative and moral force in the motion picture community."

"(To) me and my brothers Joel and Peter he was simply Dad, to Catherine (Zeta-Jones), a wonderful father-in-law, to his grandchildren and great grandchild their loving grandfather, and to his wife Anne, a wonderful husband," said Michael.

"Kirk's life was well lived, and he leaves a legacy in film that will endure for generations to come, and a history as a renowned philanthropist who worked to aid the public and bring peace to the planet."

Kirk Douglas rose to the heights of Hollywood from an impoverished childhood as the son of Jewish Russian immigrants.

He was one of the last survivors of the golden age of cinema, often portraying the macho and not-always-likeable tough guy in around 90 movies over a six-decade career.

With charming dimples and a cleft chin, Douglas was a renowned ladies' man but also admitted to being angry into adulthood because of his difficult New York childhood.

"I still have anger in me," he said in a New York Times article in 1988 after the release of his first autobiography.

"I think I'm loath to let it go because I think that anger was the fuel I used in accomplishing what I wanted to do; you see it in my films, you see it in imitations people do of me."

The role that perhaps immortalized him as a star was that of a rebellious Roman Empire slave turned gladiator in the 1960 epic Spartacus.

Douglas also produced the film, which took four Oscars. He won praise for listing in the credits the real name of Hollywood screenwriter Dalton Trumbo, who was blacklisted for his Communist sympathies and wrote under a pen name.

There were Oscar nominations for his roles as a double-crossing and womanizing boxer in Champion (1949), a ruthless movie producer in The Bad and the Beautiful (1952) and of tortured artist Vincent Van Gogh in Lust for Life (1956).

But his only Oscar came in 1995 as an honorary lifetime achievement award "for 50 years as a creative and moral force in the motion picture community."

Other major acting roles were as a French private in a botched suicidal mission in World War I in Paths of Glory (1957) and American Western legend Doc Holliday in Gunfight at the O.K. Corral (1957).

"Often cast as a villain, amoral climber or self-obsessed grabber, Kirk Douglas took care to color his hard edges with suggestions of pain, wit and sympathy," says American Film Institute, which ranks him as 17th on its list of the greatest male screen legends.

He also took up writing, penning his first autobiography The Ragman's Son in 1988 and following with around 10 other titles.

Douglas was born in New York on December 9, 1916 to illiterate Jewish Russian immigrants, an only boy with six sisters.

He started out as Issur Danielovitch, later Izzy Demsky. It was tough, he recounted later, with the family poor, anti-Semitism rife and his distant alcoholic father forced to earn a living as a ragman.

"In a sense, I've always felt on the outside, looking in," he said in the New York Times article.

"It's my background, damn it. My father was an illiterate Russian immigrant, a ragman, the lowest rung on the economic scale."

His dream of a way out was through acting and he started in high school, eventually entering the American Academy of Dramatic Arts and changing his name along the way.

To survive he took jobs as a waiter, labourer and porter. In 1941 he hit Broadway but his budding career was interrupted by service in the Navy. After the war, he headed for Hollywood.

His romantic conquests were many, although he once said he had never counted, and included starls such as Rita Hayworth, Marlene Dietrich, Joan Crawford and Ava Gardner.

Oscar-winning actor and producer Michael and Joel were from a marriage to actress Diana Webster, whom he divorced in 1951.

Three years later he married Belgian-American Anne Buydens, having Peter and then Eric, who died in 2004 from an accidental overdose.

Douglas has also brushed death: he survived a helicopter crash in 1991 and a massive stroke in 1996 that nearly robbed him of speech.

Around the time of his 100th birthday in 2016, he attributed his remarkable longevity to his second marriage.

"I was lucky enough to find my soulmate 63 years ago, and I believe our wonderful marriage and our nightly 'golden hour' chats have helped me survive all things," he said in celebrity magazine Closer Weekly.