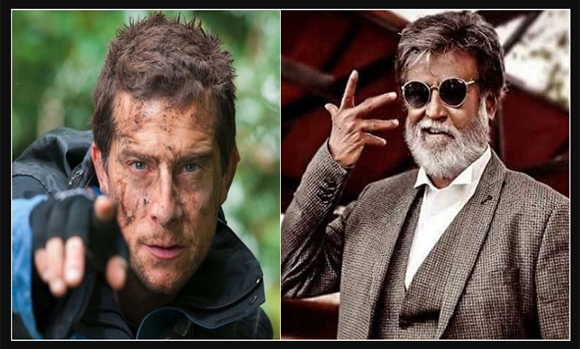 Bandipur, Jan 28: British adventurer Bear Grylls and superstar Rajinikanth arrived at the Bandipur Tiger Reserve and National Park in Karnataka on Tuesday for shooting a special episode of the show 'Man vs Wild'.

Videos and photographs of Rajinikanth arriving at a helipad were shared widely on social media.

Reports say that an agreement was signed between the Karnataka Forest Department represented by the Field Director of Bandipur and Banijay Group, Seventaurus Entertainment Studio Private Ltd, Mumbai for shooting of the documentary in December 2019. The team was also allowed to do a recce from December 27th to 29th as per the agreement, a report said.

The shooting has been permitted for six hours. "Permission for the shooting has been given for Sultan Batteri highway and ranges of Mulleholle, Maddur and Kalkere ranges. They will be shooting in non-tourist zones. If permission was given for the shooting of Wild Karnataka, then this can also be permitted. Also, no tourist or regular forest patrolling activities will be affected. The shooting will be done under special forest protection and no one will be aware of the locations," a forest official was quoted as saying in another news report.

Earlier in 2019, Grylls shot an episode of the show with Prime Minister Narendra Modi.

Entertainment
In The News