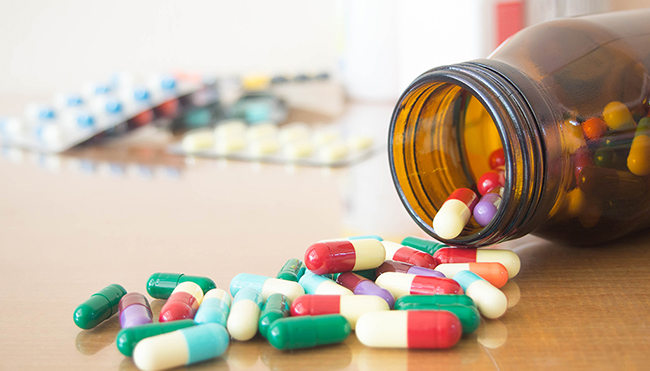 Resistance to commonly-used antibiotic clarithromycin is rising among Indian patients and that too at quite a fast pace, health experts have warned.

Clarithromycin is used to treat a wide variety of bacterial infections. This medication can also be used in combination with anti-ulcer medications to treat certain types of stomach ulcers.

According to the World Health Organization (WHO), antibiotic resistance is one of the biggest threats to global health, food security and development today.

Sunil Sofat, Additional Director, Department of Interventional Cardiology (Adult) at Jaypee Hospital in Noida, said that every antibiotic medicine has its own mechanism to treat diseases.

"Yes, this is true that the resistance to clarithromycin is rising among the Indian patients and that too at quite a fast pace. There are multiple factors for the same but one of the major reasons behind it is self-medication," Sofat told IANS.

"In India, a huge population prefers to consume over-the-counter (OTC) drugs without even consulting a doctor. In the long run, this may make them resistant to most of the antibiotics including clarithromycin," Sofat added.

In a recent study presented at United European Gastroenterology (UEG) Week Barcelona 2019, researchers have found that resistance to clarithromycin, one of the most established antimicrobials used to eradicate Helicobacter pylori (H. pylori), had increased from 9.9 per cent in 1998 to 21.6 per cent last year, with increases in resistance also seen for levofloxacin and metronidazole.

The study, which analysed 1,232 patients from 18 countries across Europe, investigated resistance to antibiotics regularly taken for Helicobacter pylori infection, a harmful bacterium associated with gastric ulcers, lymphoma and gastric cancer.

"In India the consumption of antibiotics without consulting a qualified physician is quite common which is leading to its resistance," Jain told IANS.

"There is increase in resistance to antibiotics including clarithromycin which is undoubtedly a worrisome situation in the country," Jain said.

However, Deepak Verma of Internal Medicine at Columbia Asia Hospital, Ghaziabad said: "Most of the cases that we see in India are connected to gram-negative bacteria such as e.coli that causes urinary tract infection (UTI)."

He added that the main causes for antibiotic resistance in India are its rampant misuse where people indulge in self-doctoring as well as taking medicines prescribed by unregistered medical practitioners, including quacks who suggest antibiotics quite indiscriminately.

"They primarily use antibiotics symptomatically which is not a correct method for all ailments -- without blood and urine culture. Antibiotics can force the pathogen to develop resistance," Verma explained.

"Since the clinical culture in India is different from that of the western countries, the lack of awareness of the right process to prescribe antibiotics increases the chances of people using antibiotics without questioning," he stressed.