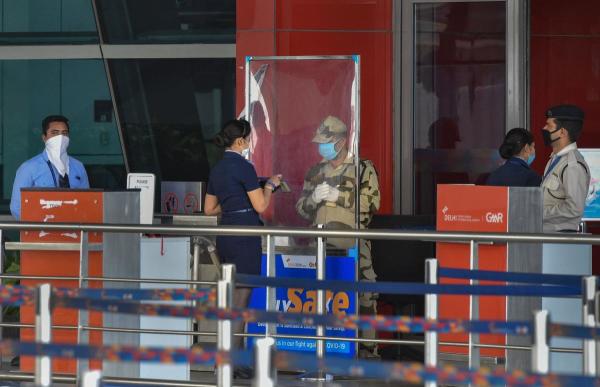 Domestic flights resumed operations on a truncated schedule on Monday with the first aircraft departing from the Delhi Airport for Pune, more than two months after a nationwide lockdown was announced to combat COVID-19.

The first flight to take off was an IndiGo aircraft to Pune, flying passengers stranded in the national capital since the lockdown was announced on March 24.

Passengers were screened at the airport with electronic thermometers, and revised protocol for air travel that included santisation of luggage through ultra-violent scanners, and maintaining physical distancing.

Only asymptomatic passengers were allowed to enter the airport.

Passengers were also seen wearing face masks and face shields given to them at the embarkation point by the airline to minimise the chances of infection while onboard.

The first flight arrived at Delhi Airport from Ahmedabad – a SpiceJet aircraft – at around 8:00 am.

BJD Lok Sabha member Anubhav Mohanty was among those who took the Air Vistara flight to Bhubaneshwar that departed Delhi airport at 6:50 am.

The food & beverage and retail outlets, which were closed for the past 63 days, opened at Terminal 3 of Delhi’s Indira Gandhi International (IGI) Airport.

The flight services resumed after a day of long and hard negotiations between the Centre and the states on Sunday.

All states finally agreed to accept at least some flights but announced different quarantine and self-isolation rules for arriving passengers to address apprehension about infections being brought in from other cities.

The Centre had issued guidelines for all modes of domestic travel that advised all asymptomatic passengers to self-monitor their health parameters for 14 days on completion of the journey and report to health authorities if they displayed any symptoms for COVID-19.

However, the Centre had allowed state governments to prescribe their own health protocols for disembarking passengers which led to differential guidelines across the country.