Kapil Sibal asks Modi: Tell us how much money you gave to labourers from PM-CARES Fund?

Efforts being made to paint me with 'saffron', says Rajinikanth 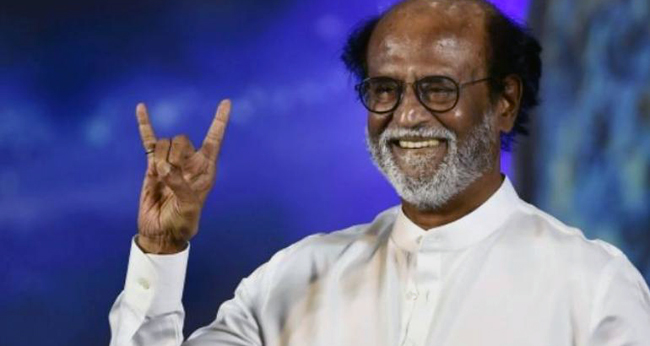 Chennai, Nov 8: Superstar Rajinikanth on Friday said the BJP has not invited him to join the party, but insisted efforts were being made to paint him with "saffron", the ideological colour the national party is associated with.

He accused a section of media and "some persons" with making such attempts.

The BJP said it has never claimed the actor was willing to join the party, while the DMK said it was not aware whom the actor was signalling to with his statement on being painted with saffron hues.

On Thursday, Rajinikanth met reporters twice within a span of few hours to talk on issues including his being "painted" with saffron.

Attempts were being made to paint both himself and Thiruvalluvar with saffron, the veteran star said referring to the recent controversy surrounding the Tamil saint-poet.

When asked about senior BJP leader Pon Radhakrishnan's recent meeting with him and the former's repeated assertions that the actor should join the party, Rajinikanth said no such invitation has been made to him.

"No offer has been made (from BJP to join the party)..
definitely not," he said. "Attempts are being made to paint me with BJP colour..

trying to paint me with saffron like Thiruvalluvar was done with.. Neither Thiruvalluvar nor me will get trapped," he said with a big laugh.

Later, when reporters raised the matter with him for a second time, Rajinikanth said "some people, some media--they are trying to colour me as a BJP man."

"But definitely it is not true," he said. Asked if it was the media or BJP that painted him in saffron colour, he said "some persons."

While any party could be happy if he joins it, only he should take a call on the matter, the actor said, adding "but it is wrong to say they are dependent on me."

On November 1, the BJP's Tamil Nadu unit had on its Twitter handle written a couplet from Thiruvalluvar's classic "Thirukkural," questioning the use of education if the Almighty was not worshipped.

Tagging the couplet, the saffron party targeted the Dravidar Kazhagam, DMK and the Left parties for allegedly deriding God and for berating believers and questioned "what is the use of their education."

Also, the party had posted a picture of Thiruvalluvar in saffron robes with sacred ash on his forehead, with the issue leading to a spat between the BJP and the DMK and other opposition parties.

When asked about this episode, Rajinkanth said while many public issues warranted media attention, there was focus on such matters which was "silly".

He said the state BJP had only put up a picture of Thiruvalluvar with saffron robes in its official Twitter handle and that it did not want this to be done all over.

"You (media) had blown up the matter.. there are so many people's issues to be discussed, but you made this big," he said, adding, "it is silly."

Further, Thiruvalluvar was a sage beyond boundaries of religion and caste, he said.

However, the saint-poet was a "believer" and not a "non-believer," which was evident from his Thirukkural couplets, he said.

Responding to Rajinikanth's statement, the BJP said it was its democratic right to meet somebody.

If anybody is interested they were "allowed and invited to join," BJP National General Secretary P Muralidhar Rao said, adding a number of celebrities and eminent persons all over the country including from Tamil Nadu were joining its ranks.

"Now it is very clear that there should not be any misconception. Anywhere in that state, we had never told Rajinikanth--film star, artiste, eminent person who has contributed to the entertainment industry of the entire country--never we told he had joined BJP. Never we told he is willing to join BJP," he told reporters here.

BJP was not interested in such "speculations," he added.

DMK Treasurer Durai Murugan, in his response to the superstar's remarks that attempts were being made to portray him as a BJP man, said it was Rajinikanth's opinion.

However, Durai Murugan said he was not aware whom Rajinikanth was sending a message to in this regard.

Meanwhile, responding to a question the slowing economic growth, Rajinikanth said the government should do whatever it takes to address it.

Asked about his stand on the Centre's demonetisation excercise in 2016, he said he had made his stand known about it "long back."

Last year, he had said the implementation of demonetisation by the Centre was flawed.

On the Ramjanma Bhoomi issue, on which the Supreme Court is likely to give its order any time, he appealed to the people to maintain peace irrespective of the ruling.

To a question, he said there was still a "vacuum" for a powerful leadership in the state, reiterating his remarks made last year in the wake of the death of chief minister J Jayalalithaa in 2016 and the illness of then DMK President M Karunanidhi, who died in August 2018.

However, DMK shot back at Rajinikanth's statement, saying its party leader MK Stalin has already filled up that vacuum.

"Stalin has filled up that vacuum a long time back," Durai Murugan said.

Efforts being made to paint me with 'saffron', says Rajinikanth