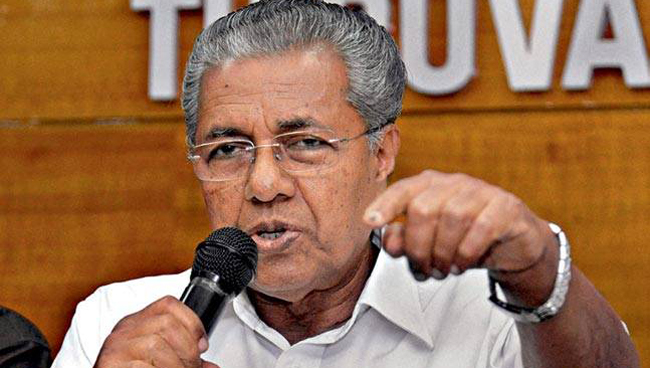 Kochi, Jan 22: The Left front government in Kerala on Monday decided to inform the Centre it would not cooperate with the updation of the NPR, saying there were fears among the public about the process and it has the "Constitutional responsibility" to alleviate them and ensure law and order.

A special cabinet meeting, chaired by Chief Minister Pinarayi Vijayan here, decided to inform the Registrar General and Census Commissioner under the Union Home Ministry that it was unable to cooperate with anything with regard to the updation of the NPR.

"The decision was taken as it was the Constitutional responsibility of the government to alleviate the fears of general public and ensure law and order situation in the state," a Chief Minister's Office release said.

However, the state would fully cooperate with the census procedures, it said.

The LDF government, which has been on a warpath against the Centre over the Citizenship Amendment Act, has last month stayed all activities related to updation of NPR, considering 'apprehensions' of public that it would lead to NRC in the wake of the controversial CAA.

"As the NPR is a process that leads to the National Register of Citizens (NRC), there is a sense of fear among the people that its implementation could lead to widespread insecurity", the CMO release said on Monday.

The experience of the state which had already compiled the NRC was an example for this, it added, in apparent reference to Assam.

Kerala had already stopped all procedures regarding the NPR updation, the release said adding there was also a report of the state police that the if the government went ahead with the procedures, it would adversely impact the law and order situation.

The district collectors have also informed the government that the Census procedures would be affected if the updation of the NPR was done along with it, the CMO release said.

The CPI(M)-led LDF government had recently convened a meeting of political parties and socio-religious organisations here on December 29 in the wake of the concerns among people in various stratas of the society, it said.

A special assembly session was convened and a resolution was passed requesting the Centre not to implement the CAA and the government had also approached the apex court against the law, it added.