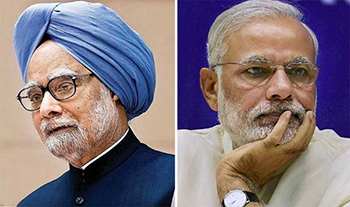 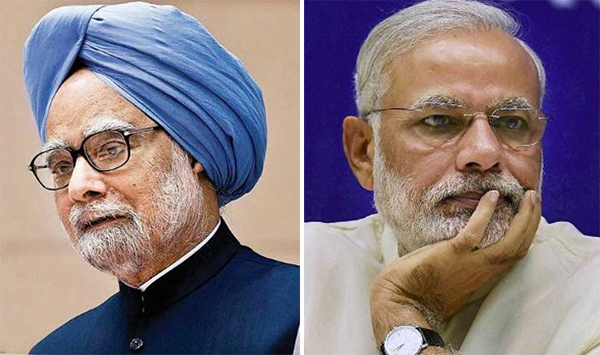 New Delhi, May 14: Former prime minister Manmohan Singh has written a letter to President Ram Nath Kovind in which he has condemned Prime Minister Narendra Modi's 'threat' to the Indian National Congress (INC) during a speech in Hubli, Karnataka.

Singh said Prime Minister Modi was "using his powers and privileges as Prime Minister to settle personal and political scores" during the Karnataka elections.

On May 6, Prime Minister Modi in a public rally in Hubli said: "Congress ke neta kan khol karke sun lijiye, agar seemao ko paar karoge, to ye Modi hai, lene ke dene pad jayenge (Congress leaders listen to me while having your ears wide open. If you cross limits, I am Modi, you will have to pay consequences.)"

Dr Singh said Prime Minister Modi's words were "menacing and intimidating with intent to insult and provoke breach of peace".

"We would like to state that neither the party nor our leaders will be cowed down by such threats," Singh added.

Throughout the letter, Singh asked the President to "caution" Prime Minister Modi against using "unwarranted, threatening and intimidating language" against anyone.

Apart from Singh, the letter was signed by Leaders of Opposition of both houses of Parliament and senior Congress leaders like P. Chidambaram, Ashok Gehlot, Ambika Soni, Mukul Wasnik, Motilal Vora, Kamal Nath and Ahmed Patel.

Here's the full text of the letter:

"I, ___, do swear in the name of God/solemnly affirm that I will bear true faith and allegiance to the Constitution of India as by law established, that I will uphold the sovereignty and integrity of India, that I will faithfully and conscientiously discharge my duties as the Prime Minister for the Union and that I will do right to all manner of people in accordance with the Constitution and the law, without fear or favour, affection or ill-will. I will not directly or indirectly affirm, communicate or reveal to any person or persons any matter which shall be brought under my consideration or shall become known to me as the Prime Minister for the Union except as may be required for the due discharge of my duties as such Minister."

In the past, all Prime Ministers of India have maintained immense dignity and decorum in discharge of public or private functions/actions. It is unthinkable that in our democratic polity, the Prime Minister as Head of the Government would utter words which are threatening, intimidating in content and a public warning to the leaders and members of main opposition party i.e. Indian National Congress.

The Prime Minister on 06th May 2018 at Hubli in Karnataka in his public speech delivered the following address (In Hindi): Video Link: youtube.com/watch?v=7rRpte2qChk

The threat held by the Prime Minister to the INC's leadership deserves to be condemned. This cannot be the language of the Prime Minister of a constitutionally governed country of 1.3 Billion people. Such discourse whether in public or private is unacceptable conduct. The words used are menacing and intimidating with intent to insult and provoke breach of the peace. The Congress Party is the oldest party in India and has faced many challenges and threats. The Congress leadership has always exhibited courage and fearlessness in facing threat and challenges. We would like to state that neither the party nor our leaders will be cowed down by such threats.

The President of India as the constitutional head of the Union of India enjoys high duty and obligation to advise and guide the Prime Minister and his cabinet. Admittedly, the Prime Minister is not expected to use menacing language even in the course of election campaign which tantamounts to using his powers and privileges as the Prime Minister to settle personal and political scores.

Hon'ble President may caution the Prime Minister from using such unwarranted, threatening and intimidating language against leaders of the Congress Party or any other party or person as it does not behove the position of the Prime Minister 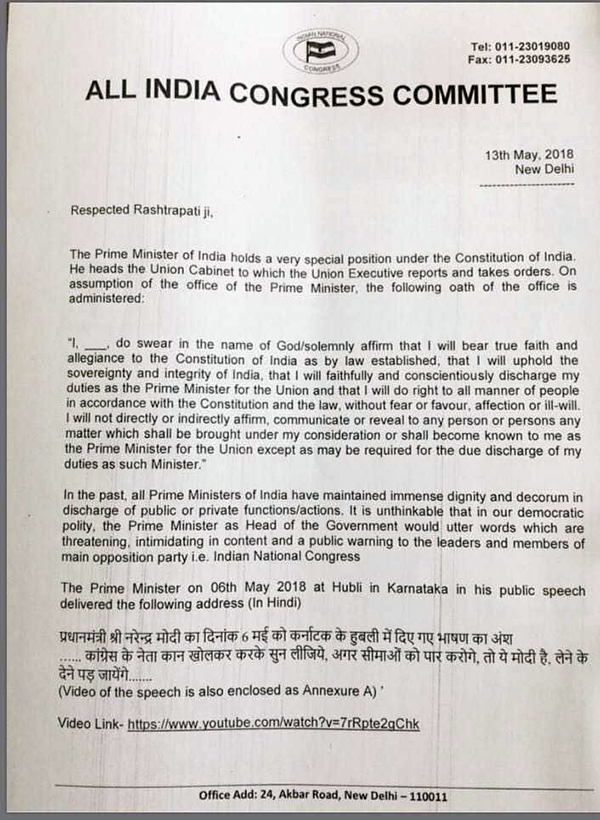 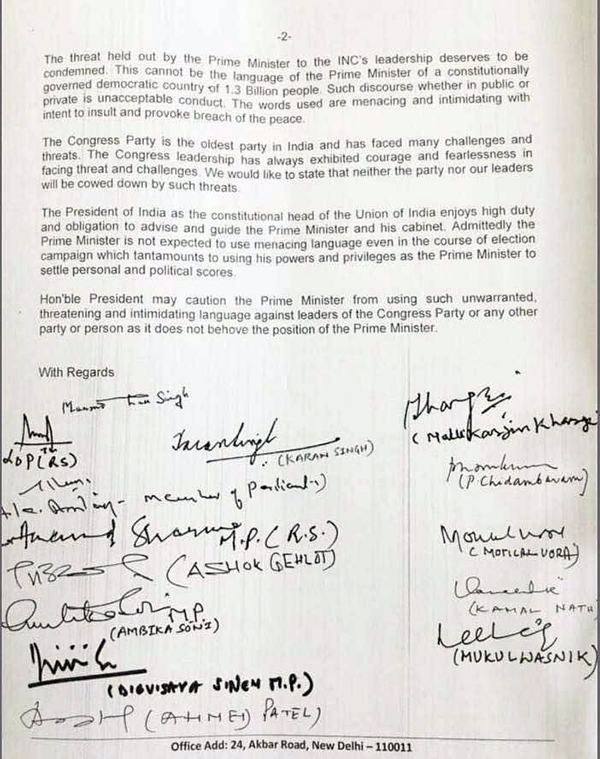