Modi in Thimphu: Honoured to have a friend like Bhutan 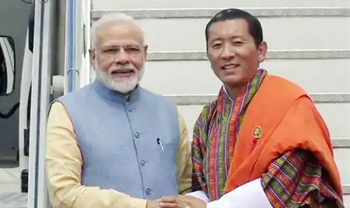 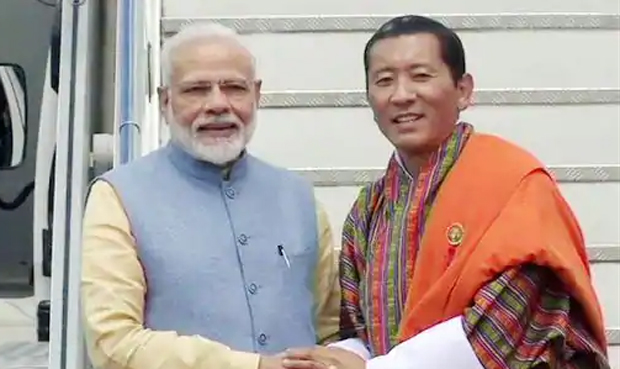 Aug 18: India’s ‘Neighbourhood First’ policy was evident on Saturday with Prime Minister Narendra Modi and his Bhutanese counterpart Lotay Tshering holding wide-ranging talks in Thimphu to further energise ties and Modi declaring that India was honoured to have a friend like Bhutan. The two countries signed 10 MoUs after the talks in the field of space research, aviation, IT, power and education.

The two leaders jointly inaugurated the ground earth station and Satcom network, developed with assistance from Isro for utilisation of South Asia Satellite in Bhutan. “We had a comprehensive meeting, where we deliberated on the relations between India and Bhutan. There is great scope to further improve economic and cultural ties,” Modi said.

On ties with India, Bhutanese PM Tshering said, “India and Bhutan may vary in size but our beliefs, values and motivation are common. Today, I am overwhelmed with the sense pride that the two countries are living the definition of true friendship. This is the truth. This is the way forward.”

Modi also launched RuPay Card in Bhutan by making a purchase at Simtokha Dzong, built in 1629 by Shabdrung Namgyal, which functions as a monastic and administrative centre and is one of the oldest dzongs (fortified building).

“I am very happy that today we have launched RuPay card in Bhutan. This will further enhance our relationship in digital payments, and trade and tourism. Our shared spiritual heritage and strong people-to-people relationship are key of our relations,” said Modi, who is on his first visit since his re-election in May. He also inaugurated the 740 MW Mangdechhu hydroelectric power plant and launched stamps to commemorate five decades of India-Bhutan hydropower cooperation.

“I am very happy to come to Bhutan at the beginning of my second term,” Modi said in a joint press statement after delegation-level talks with his Bhutanese counterpart Lotay Tshering at Simtokha Dzong. “The relations between India and Bhutan are based on the common interests of progress, prosperity and security of the people of both countries,” Modi said as he described Bhutan as “special friend” of India.

“Today, we have achieved another historic milestone of this journey with the inauguration of the Mangdechhu project. With the cooperation of both countries, hydro-power generation capacity in Bhutan has crossed 2,000 MW. I am confident that we will also take other projects forward very fast,” he said. On increasing the currency swap limit for Bhutan under the Saarc currency swap framework, Modi said India’s approach was “positive”. He said an additional $100 million will be available to Bhutan under a standby swap arrangement to meet the foreign exchange requirement.

On ties with India, Tshering said, “On his (PM Modi) first visit to Bhutan in 2014, I remember him saying that Bhutan and India are close not because we have open borders, but because we have opened our hearts to each other. Your visit this time shows how much you meant it.”

“It is a privilege for India to be a major partner in the development of Bhutan. India’s cooperation in Bhutan’s five-year plans will continue,” Modi said. He also announced to increase the supply of LPG from India from 700 to 1,000 MT per month to meet the growing needs of the people of Bhutan.

The satellite ground station in Thimphu, which PM Modi inaugurated on Saturday, is part of the South Asia Satellite or Saarc satellite programme. India had launched the Rs 405-crore satellite on May 5, 2017 as a “free gift” to Saarc members — minus Pakistan. Isro chairman K Sivan told TOI, “The station was set up by Isro with its funds.” He said Isro had conducted a workshop last year and provided information needed to set up the station.

Modi in Thimphu: Honoured to have a friend like Bhutan