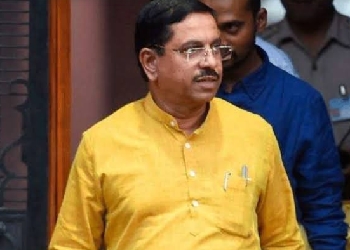 Hubli, Jul 12: Union Parliamentary Affairs Minister Pralhad Joshi on Sunday said that the Monsoon session of Parliament will be held with the government ensuring all health precautions for COVID-19 are followed.

"Monsoon session (of Parliament) will certainly be held. The government will do all the formalities and take all precautions," the Parliamentary Affairs Minister told reporters here.

Earlier in March, the Parliament had passed 12 bills during the curtailed budget session with Lok Sabha passing 15 bills and Rajya Sabha 13.
During the session, 19 bills were introduced in the two Houses (18 in Lok Sabha and 1 in Rajya Sabha). The two Houses were adjourned sine die after completion of the budgetary process including passage of the Finance Bill.

The second part of the session was curtailed in view of the threat of the spread of coronavirus.
On June 1, Rajya Sabha Chairman M Venkaiah Naidu and Lok Sabha Speaker Om Birla had held a detailed discussion on holding the ensuing monsoon session of Parliament in view of the coronavirus-induced norm of social distancing, sources said.

They said the leaders have taken note of reports suggesting that the fight against COVID-19 is likely to be a long haul.