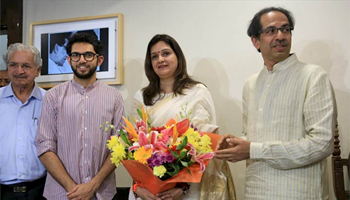 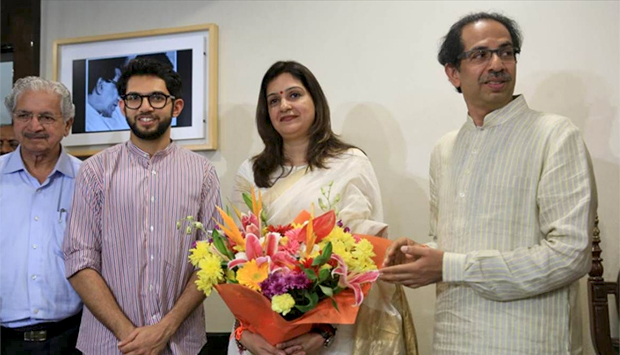 New Delhi, Apr 19: Congress national spokesperson and convenor of party's media cell Priyanka Chaturvedi, who was miffed at the reinstatement of some party workers who had misbehaved with her, resigned from the party and joined the Shiv Sena on Friday.

She joined the Shiv Sena in the presence of the party president Uddhav Thackeray, sources said.

Earlier, after quitting all posts in the party, Chaturvedi sent her resignation to Congress President Rahul Gandhi and other senior leaders.

"In the last few weeks certain things have convinced me that my services are not valued in the organisation and that I have reached the end of the road. At the same time I also feel that more time that I spend in the organisation will be at the cost of my own self respect and dignity,"Chaturvedi said in her resignation letter.

She has also changed her introduction in her Twitter account where she had made a clear mention earlier about posts she held in the party.

"I am absolutely overwhelmed and grateful with the love and support I have got across board from the nation in the past 3 days. I consider myself blessed with this immense outpouring of support. Thank you to all who have been a part of this journey," Chaturvedi tweeted in a farewell message to the party.

In her resignation to Gandhi, she said, "What saddens me is that despite the safety, dignity, empowerment of women being promoted by the party and has been your call to action the same is not reflected in the action of some of the members of the party. A serious incident and misbehaviour against me by certain party members, while I was on official duty for the party, has been ignored under the guise of all hands needed for election.

"This indignity to me has been the final factor to convince me to move on and focus on other things outside INC. I would request you to accept my resignation and relieve me of all my roles and responsibilities from the party on immediate basis and oblige."

She was unhappy at the reinstatement of some party workers in Uttar Pradesh who had "misbehaved" and "threatened" her during her press conference in Mathura a few days ago.

Chaturvedi had lashed out at the party in public on Thursday and accused it of giving preference to "lumpen goons" over those who had given their "sweat and blood" to the Congress.

She said it was unfortunate and saddening that those who threatened her have got away without even "a rap on their knuckles".

The party, which had suspended those workers, reinstated them on April 15.

The action of rescinding the suspension, party leaders had claimed, was taken on the recommendations of Congress general secretary for West Uttar Pradesh Jyotiraditya Scindia.

Chaturvedi had also been seeking the Congress ticket from Mumbai (North West).

She has been trending on social media for her "Kyunki Mantri Bhi Kabhi Graduate Thi" jibe at Union minister Smriti Irani, who is contesting from Amethi in Uttar Pradesh against Congress president Rahul Gandhi.