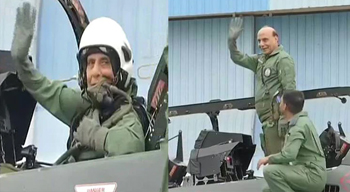 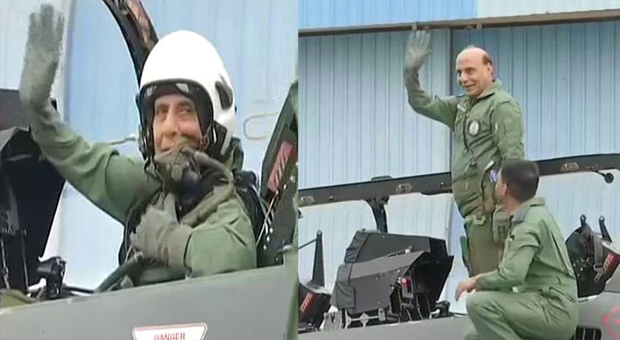 The minister flew a sortie in the twin-seater version of Tejas from HAL airport in Bengaluru. Wearing a G-suit, Rajnath Singh had earlier on Thursday posted photos on Twitter saying he was "all set" for the big day.

A defence ministry official had on Wednesday said the minister would be "taking a sortie" in order to boost the morale of officers who have been involved in the development of "indigenously-made Tejas".

"It will also boost the morale of IAF pilots who are flying these aircraft," the official had said.

In a major milestone in the development of a naval version of Tejas, the aircraft had earlier successfully carried out an "arrested landing", a key performance demonstrating its ability to land on board an aircraft carrier.

IAF PILOTS TO ACQUAINT DEFENCE MINISTER WITH THE FIGHTER

Designed and developed by the Bengaluru-based Aeronautical Development Agency (ADA) of the state-run Defence Research and Development Organisation (DRDO) and built by the aerospace behemoth Hindustan Aeronautics Ltd (HAL), the single-engine, delta wing, multi-role fighter will be flown by a senior IAF pilot.

Before taking off for a 30-minute sortie, the pilots of the 45 Squadron Flying Daggers will acquaint the Defence Minister with the air prowess of the home-grown fighter, its avionics, controls and radar in the glass cockpit and the weapons it carries for strike power," an official told news agency.

The squadron is based at the Sulur air base near Coimbatore in southern Tamil Nadu.

Rajnath Singh will later attend an exhibition of products of the Defence Research and Development Organisation (DRDO) in Bengaluru on Thursday, he had said

Though the IAF will initially have two squadrons of Tejas with 18 fighters each, it plans to have more squadrons with an additional 83 of them as Mark-1 version.

Initially, the IAF had placed an order with the Hindustan Aeronautics Limited (HAL) for 40 Tejas aircraft. Last year, the IAF issued the request for proposal (RFP) to HAL for the procurement of another batch of 83 Tejas at a cost of over Rs 50,000 crore.