Religious freedom as important as freedom of rights: Nikki Haley 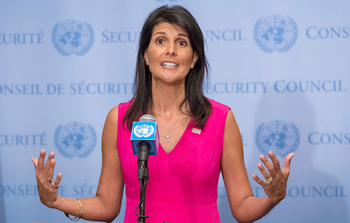 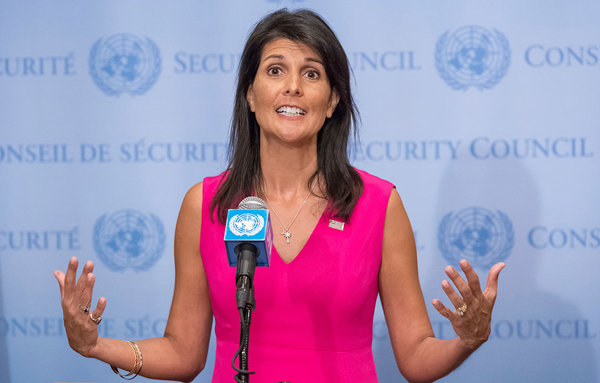 New Delhi, Jun 27: United States Ambassador to the United Nations, Nikki Haley said freedom of religion is as important as freedom of rights.

Haley, who is in India from June 26-28, said she looks forward to the inter-faith tour she will be taking on Thursday.

"I look forward to the inter-faith tour we are going to take tomorrow because we think freedom of religion is just as important as freedom of rights and freedom of people," Haley said.

The US Ambassador to the UN also said the major focus of her visit to India is to strengthen the relation between Washington and New Delhi.

"On this trip to India, we have got a lot packed into a short amount of time. But it really comes down to the strength of the United States and India partnership," the US envoy said, on the sidelines of her visit to Humayun's Tomb here.

"Whether it is counter-terrorism or better ways to work together more strongly on the military aspect, there are lots of things that India and the US have in common," she said.

She further asserted that her visit to India is to solidify the US' love for the country, belief in the friendship the two countries share and the willingness to make that relationship even stronger.

The 46-year-old diplomat, who is the highest ranking Indian-American in US President Donald Trump's administration, will meet senior Indian Government officials, NGO leaders among others and discuss a host of topics including India-US strategic ties and significant global developments.

Her visit comes few days after several Indians were detained at Oregon and New Mexico for illegally entering the US as part of Trump's Zero Tolerance Policy.

Haley's visit will be followed by a 2+2 dialogue between the US and India on July 6. It will be attended by the US Department of State, US Secretary of State Michael R. Pompeo and Secretary of Defense James Mattis will host Indian External Affairs Minister Sushma Swaraj and Defence Minister Nirmala Sitharaman for the dialogue.

They are expected to discuss bilateral defence and security cooperation.

Religious freedom as important as freedom of rights: Nikki Haley