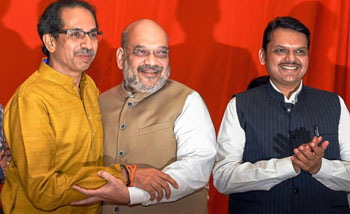 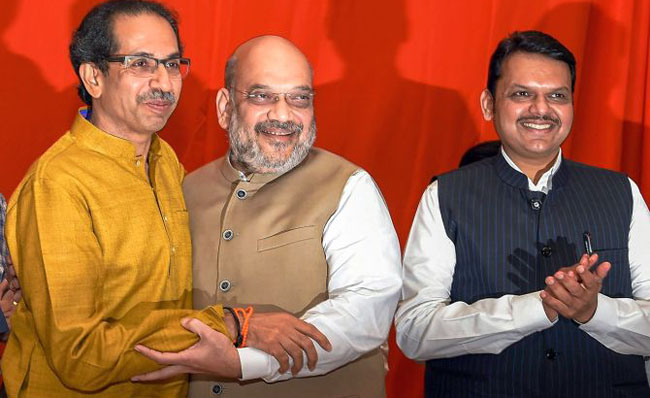 Mumbai, Sept 18: Amid talks of the BJP seeking more seats than the Shiv Sena for the upcoming Maharashtra polls, the Uddhav Thackeray-led party is trying to corner the senior ally over the Aarey land, induction of several political leaders and the Ram temple issues.

The BJP, however, said the Sena needs to look at things practically in view of the Amit Shah-led party's vote share going up in the Lok Sabha polls held earlier this year.

In the 288-member Maharashtra Assembly, the Sena is ready for a 135 seats each formula with the BJP, while leaving 18 seats for their allies.

But, the BJP no longer seems willing to accept it.

"The BJP is not willing to give more than 120 seats to the Sena and we don't approve of it. Before the announcement of alliance in February this year, Uddhavji and BJP president Amit Shah agreed to contest equal number of seats in the Assembly polls," a senior Sena leader said.

However, a BJP leader pointed out that as compared to the 2014 polls, the party's vote share increased in the Lok Sabha elections this year.

It is a fact that our leader (Prime Minister) Narendra Modi's image has helped some of the 18 Sena Lok Sabha members to retain their seats. Hence, we expect to contest more seats than the Sena, and it is based on the (latest) trends," he said.

With the BJP seemingly firm on contesting more seats, the Sena has been trying to put it in the dock by opposing the proposed tree felling in Aarey Colony here to make way for a Metro car shed.

It also took a jibe at the BJP over its move to induct a number of political leaders, and also reiterated its demand for the Ram temple in Ayodhya.

Another BJP leader said this was a "trick" the Sena was playing "to put us on the back foot and negotiate for more seats with us".

"What the Sena needs to understand is that going by the mandate we got in the Lok Sabha polls, it needs to think practically. The BJP has increased its strength in rural areas as well," he said.