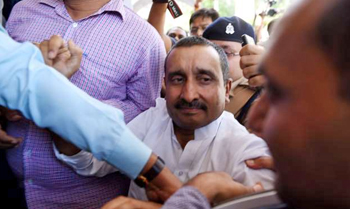 New Delhi, Sept 19: A Delhi court on Wednesday directed the Uttar Pradesh government to file a report on possible measures that can be taken to relocate the Unnao rape survivor, currently admitted at AIIMS, and her family to a safe place there or in the neighbouring state, after the CBI informed that they faced the highest threat level.

District Judge Dharmesh Sharma issued a notice to the Chief Secretary of the UP government to file a report within a week on the steps that could be taken to relocate the rape survivor, her mother, two sisters and brother to a safe place.

The woman, who was allegedly raped by expelled BJP MLA Kuldeep Singh Sengar, is currently admitted at AIIMS hospital here following an accident on July 28. Her mother along with sisters and brother are presently in Delhi with her.

The court's directions came after the CBI filed a 'threat perception report' in which it was indicated that the victim and her family members have 'Category-A'.

Under this category, the threat extends to the life of witness and his or her family members during the investigation, trial and thereafter.

"Let a notice be issued to the Chief Secretary, Uttar Pradesh, to file a report in order to apprise the court as to what possible measures can be taken at their end to relocate the woman and her family members comprising of her mother and two young sisters and brother to any other safe place in the state of Uttar Pradesh or elsewhere in the neighbouring state, with some financial support to the family," the court said.

It also directed the state government to inform the court about other measures that could be taken by it to protect the life and liberty of the woman and her family.

The court has put up the rape case for further hearing on September 24.

It had earlier framed charges against Sengar and co-accused Shashi Singh for allegedly kidnapping and raping her in 2017, when she was a minor.