I love working with Trump; we didn’t get anything from US for free: Saudi crown prince 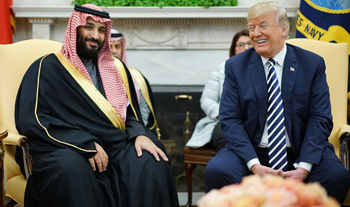 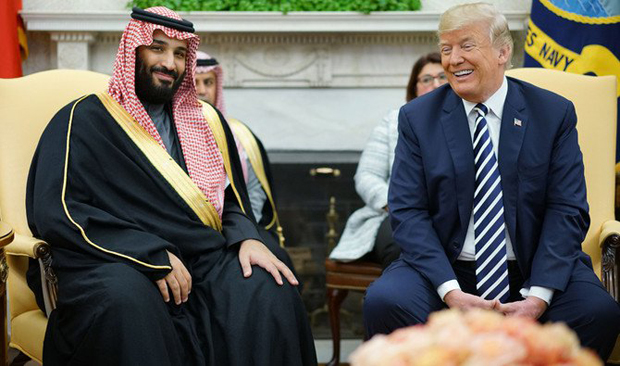 Jeddah, Oct 6: Saudi Arabia’s crown prince said relations with the US are still strong despite comments by Donald Trump that the Kingdom must pay for American military support.

Crown Prince Mohammed bin Salman said: “Actually we will pay nothing for our security.” The Kingdom pays for all its military equipment from the US, he said:  “We believe that all the armaments we have from the United States of America are paid for, it’s not free armament.”

Since the beginning of Saudi-US relations “we’ve bought everything with money,” the crown prince told a group of Bloomberg reporters on Wednesday.

Saudi Arabia changed its military spending strategy after Donald Trump was elected president in 2016, with 60% of spending with the US over a decade, the prince said.

The various deals, which were signed in 2017 when President Trump made Saudi Arabia his first overseas visit, means that “part of these armaments will be manufactured in Saudi Arabia, so it will create jobs in America and Saudi Arabia, good trade, good benefits for both countries and also good economic growth. Plus, it will help our security,” he said.

“I love working with him. I really like working with him and we have achieved a lot in the Middle East, especially against extremism, extremist ideologies, terrorism and Daesh,” said the crown prince.

President Trump and King Salman launched a global counter terror center in Riyadh during his visit to the country.

Prince Mohammed visited Washington in March where the president hailed the links between the two allies. “The relationship is probably the strongest it’s ever been,” Trump said at a joint press conference.

“We have huge investments between both countries. We have good improvement in our trade – a lot of achievements, so this is really great,” the prince said on Wednesday.

The US-Saudi efforts, along with global partners, have pushed back extremists and terrorists and countered Iran’s “negative moves in the Middle East in a good way,” he told the publication.

On the topic of controlling oil prices, the crown prince said the Kingdom has never “decided that this is the right or wrong oil price. The oil price depends on trade – consumer and supplier – and they decide the oil price based on trade and supply and demand.

What we are committed in Saudi Arabia is to make sure there is no shortage of supply. So we work with our allies in OPEC and also non-OPEC countries to be sure that we have a sustainable supply of oil and there is no shortage and that there is good demand, that it will not create problems for the consumers and their plans and development,” he said.

Prince Mohammed confirmed that Trump did make a request to Saudi Arabia and OPEC to replace whatever may be lost of supply from Iran. “And that happened.  Because recently, Iran reduced their exports by 700,000 barrels a day, if I’m not mistaken. And Saudi Arabia and OPEC and non-OPEC countries, they’ve produced 1.5 million barrels a day. So we export as much as 2 barrels for any barrel that disappeared from Iran recently. So we did our job and more. We believe the higher price that we have in the last month, it’s not because of Iran. It’s mostly because of things happening in Canada, and Mexico, Libya, Venezuela and other countries that moved the price a little bit higher. But Iran, definitely no. Because they reduced 700,000 barrels and we’ve exported more than 1.5 million barrels a day,” the crown prince said.

When asked about diplomatic issues with Germany and Canada and how that differed from what Trump said, the prince replied: “It’s totally different. Canada, they gave an order to Saudi Arabia on an internal issue. It’s not an opinion of Canada about Saudi Arabia as much as they are giving an order to a different country. So we believe this is a totally different issue. Trump is speaking to his own people inside the United States of America about an issue.”

I love working with Trump; we didn’t get anything from US for free: Saudi crown prince