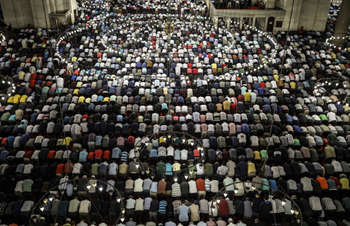 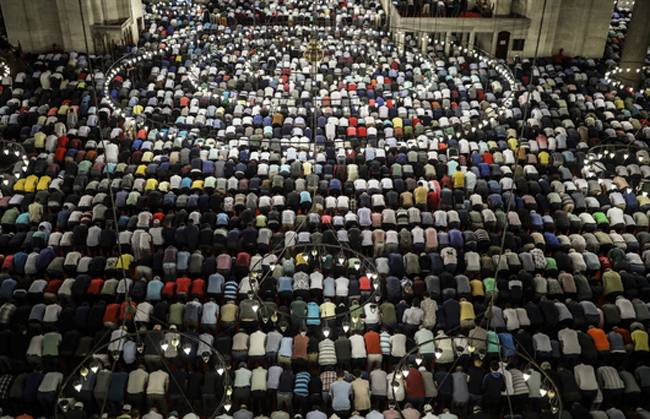 Dubai, Aug 11: Joy and celebrations are sweeping across the UAE and the Muslim world as residents and visitors mark Eid Al Adha, the Festival of Sacrifice, on Sunday.

The annual Islamic festival, which this year begins on August 11 in the UAE, sees Muslims offer a sacrificial animal (typically a goat or sheep) in gratitude for Allah’s blessings.

Eid Al Adha is named after the sacrificial ritual, one of the rites of the Haj in Makkah, Saudi Arabia, where some 2 million Muslims from around the world have gathered for the annual occasion.

In the UAE, Eid Al Adha is being celebrated as a four-day public holiday, from Saturday (August 10) to Tuesday (August 13).

This is the moment when residents visit each other’s homes for Eid greetings and go out for a variety of dining, entertainment and shopping options.

Cattle markets and abattoirs had already prepared days in advance for the Eid rush to buy and sacrifice livestock.

It is common practice to gift some of the sacrificial meat, donate a part to charity and consume the rest at home. The sacrificial rite is preceded by the Eid congregational prayer held in large mosques and open areas shortly after sunrise.

Family lunches as well as meals or tea parties with friends at home are a main part of the festivities. Traditionally, Muslims cook some of the meat from the sacrificial animal for lunch or dinner. Many people also like to head out to restaurants.

Sweets, too, are a major flavour of Eid and shops are brimming with treats. As usual, especially in demand are traditional stuffed dates, Arabic sweets, dry fruits and chocolates, shopkeepers said. A salesman at a sweetshop in Diyafah said customers keep shopping till 4am on the eve of Eid.

Richly-decorated special Eid packaging and trays laden with sweets can be seen at the shops. Some non-Muslims are also buying sweets as gifts for Muslim colleagues and friends.

Children are in for a double treat as elders present them cash gifts called ‘Eidiya’ or ‘Eidee’.

Events and attractions
The UAE, like other Muslim countries, has organised a range of Eid events and activities.

Dubai Festivals and Retail Establishment (DFRE) is rolling out its ‘Eid in Dubai — Al Adha’ calendar of events with a focus on family fun.

There will be stage performances and roaming shows at malls, including Ibn Battuta Mall, Mercato Mall, and City Centre Mirdif, among others.

A complete line up of things to do for Eid is available on www.eidindubai.ae and on @dssoscial accounts of DFRE.

There will be fireworks at Dubai Festival City Mall on Sunday and Monday, at 8pm and 10pm.

Also, from Sunday to Tuesday, IMG Worlds of Adventure will be hosting shows between 11am and 11pm. Meanwhile, Modhesh World, a free-to-enter entertainment park at Dubai World Trade Centre, will continue to provide games, rides and entertainment throughout the Eid break and beyond.

Play areas and activations will also be offered at Children’s City, at Creek Park Gate 1, on Monday and Tuesday from 11am to 1pm, and then 4pm to 6pm.

Despite the hot weather, some families will be heading to public parks, beaches and tourist spots for an Eid getaway; while others have planned staycations at UAE resorts for the long weekend.

Online shopping is in
Shopping for new clothes and gifts is also a main aspect of Eid and this year many residents logged in for online deals instead of heading to the mall.

“We start shopping for Eid about 10 days ahead, beginning with the gifts and the new outfits to the groceries,” Alexandre LeChef, a French-Syrian public relations director and father-of-two, told Gulf News.

“I don’t want to miss out on the latest toys and must-haves, so this is what I usually pick up first, including video games, consoles and toys. We’ve also managed to find our Eid outfits, but need to get matching shoes that will please my two daughters.”

LeChef said he likes to finish his shopping early, including picking up ingredients for the traditional sweets and pastries.

Like Le Chef, Ansar Babu, a 39-year-old marketing executive from India, said he prefers to shop with his wife.

“We have families on both sides living here, and Eid is very a family affair. So we spend quite a bit of our time getting clothes for the family, and also to present as gifts to our extended family. There were quite a few sales on last weekend, and we’ve managed to get everything we wanted,” Babu said.

This Eid, Babu and his family are also focusing on renovating their house, and they so ended up making a few household purchases.

Sara Mousa, a 25-year-old Canadian-Egyptian media executive, said she loves to dress to the nines on Eid.

“I love wearing new clothes and accessorising, but had put off my purchases till the last minute. Everything seemed a tad expensive despite the sales. If I don’t find what I’m looking for, online shopping is always an option,” she said.

LeChef agreed, saying he had found a number of bargains online.

“I was able to find a few things that I couldn’t find in stores, and they were delivered the very next day too,” he added.

To ensure the safety and security of residents in the Eid rush, police departments nationwide are deploying extra units and operating special 24-hour patrols. Public transport services have also been extended to meet high passenger demand during the festive season. Meanwhile, public parking has been made free for the Eid holidays.

What is Eid Al Adha?

The Muslim festival marks the completion of rite of sacrifice during the annual Haj pilgrimage to the holy city of Makkah, Saudi Arabia. Devotees globally also sacrifice an animal, usually a sheep or goat, to show gratitude for the blessings of Islam.

Muslims believe Allah accepted a ram as a sacrifice from Prophet Ebrahim (PBUH) after he had tested him with the order to sacrifice his son Prophet Ishmael (PBUH). When he obeyed, his son was replaced by a ram.

The first day of Eid Al Adha starts with group Eid prayers held in larges mosques and dedicated open spaces in each emirate shortly after sunrise. Many worshippers proceed to purchase a goat or sheep (or a camel or cow, in some cases) from the livestock market so they can offer the Eid sacrifice at abattoirs.

It is recommended to gift some of the sacrificial meat, donate a part in charity and consume the rest at home. Eid dishes are a main part of festivities, as the Eid days are known as “the days of eating and drinking” in Islam.

Muslims put on their best clothes for the occasion. They also gift money to children in a tradition called “Eidiya” or “Eidee”.