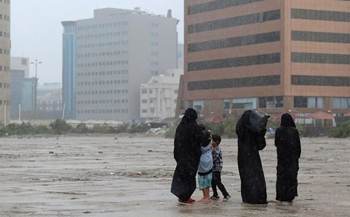 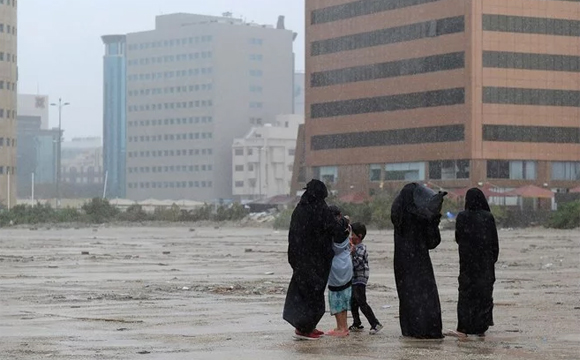 Schools in the United Arab Emirates were to be shut on Wednesday due to bad weather and poor road conditions, the UAE Ministry of Education earlier announced on Tuesday.

Images of flooded roads and lighting bloats were shared on social media by affected residents in different areas in the UAE.

Police also took to social media to warn motorists of possible hazards and advised them to drive safely.

The UAE’s National Centre of Meteorology said there will be continued convective clouds – which bring rainshowers – formed over the sea and other parts of the country, accompanied by strong winds.

Unstable weather in coastal and northern areas of the UAE will spread to the mainland, weather forecaster Amna Al-Zaabi told Arab News. Temperatures at sea are expected to drop to five degrees Celsius, she added.

Meanwhile, Saudi Arabia witnessed heavy rain, thunderstorms, lightning and a substantial drop in temperature in the capital, Riyadh on Tuesday.

Organizers postponed the launch of entertainment festival Diriyah Season to Wednesday, from the previous day, due to heavy rainfall.

The Saudi General Authority for Meteorology and Environmental Protection issued an alert on Wednesday for further thunderstorms, accompanied by active dusty wind in the province of Makkah, and also warned residents of low visibility.

Saudi civil defense advised residents in other parts of the Kingdom to avoid flooded areas and valleys.

In Oman, the Directorate General of Meteorology told Arab News that the weather is partly cloudy with rainfalls over the northern provinces of the Sultanate. It is expected for the rain to extend to Hajar Mountains and coastal areas this evening.

“In the event of thunderstorms, the wave may be rough and therefore I advise people not to come near the sea at that time,” Weather Forecaster to the Directorate General of Meteorology told Arab News.

“Recent weather and satellite radar images illustrate the flow of clouds on the Hajar Mountains with varying rainfall and heavy thunderstorms, sometimes on the Western Hajar Mountains and adjacent areas,” the Public Authority for Civil Aviation said in a statement.