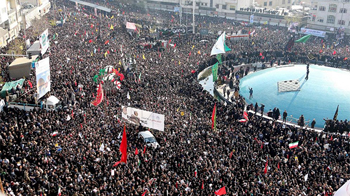 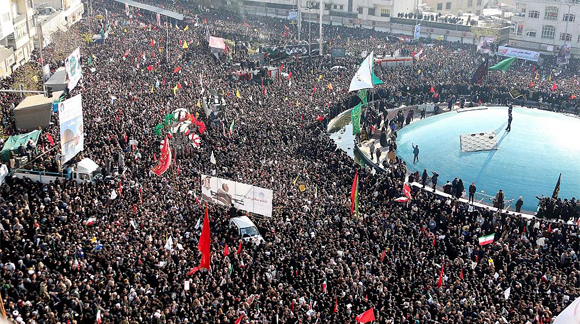 Dubai/Washington, Jan 6: Tens of thousands of Iranians thronged the streets of Tehran on Monday for the funeral of Quds Force commander Qassim Suleimani who was killed in a US air strike last week and his daughter said his death would bring a "dark day" for the United States.

"Crazy Trump, don't think that everything is over with my father's martyrdom," Zeinab Suleimani said in her address broadcast on state television after US President Donald Trump ordered Friday's strike that killed the top Iranian general.

Iran has promised to avenge the killing of Qassim Suleimani, the architect of Iran's drive to extend its influence across the region and a national hero among many Iranians, even many of those who did not consider themselves devoted supporters of the Islamic Republic's clerical rulers.

The scale of the crowds in Tehran shown on television mirrored the masses that gathered in 1989 for the funeral of the founder of the Islamic Republic, Ayatollah Ruhollah Khomeini.

In response to Iran's warnings, Trump has threatened to hit 52 Iranian sites, including cultural targets, if Tehran attacks Americans or US assets, deepening a crisis that has heightened fears of a major Middle East conflagration.

The coffins of the Iranian general and Iraqi militia leader Abu Mahdi al-Muhandis, who was also killed in Friday's attack on Baghdad airport, were passed across the heads of mourners massed in central Tehran, many of them chanting "Death to America".

One of the Islamic Republic's major regional goals, namely to drive US forces out of neighbouring Iraq, came a step closer on Sunday when the Iraqi parliament backed a recommendation by the prime minister for all foreign troops to be ordered out.

"Despite the internal and external difficulties that we might face, it remains best for Iraq on principle and practically," said Iraqi caretaker Prime Minister Adel Abdul Mahdi, who resigned in November amid anti-government protests.

Iraq's rival Shi'ite leaders, including ones opposed to Iranian influence, have united since Friday's attack in calling for the expulsion of US troops.

Esmail Qaani, the new head of the Quds Force, the Revolutionary Guards' unit in charge of activities abroad, said Iran would continue Suleimani's path and said "the only compensation for us would be to remove America from the region."

Prayers at Suleimani's funeral in Tehran, which will later move to his southern home city of Kerman, were led by Iran's Supreme Leader Ayatollah Ali Khamenei. Suleimani was widely seen as the second most powerful figure in Iran behind Khamenei.

The funeral was attended by some of Iran's allies in the region, including Ismail Haniyeh, the leader of Palestinian group Hamas who said: "I declare that the martyred commander Suleimani is a martyr of Jerusalem."

Adding to tensions, Iran said it was taking another step back from commitments under a 2015 nuclear deal with six major powers, a pact from which the United States withdrew in 2018.

Washington has since imposed tough sanctions on Iran, describing its policy as "maximum pressure" and saying it wanted to drive down Iranian oil exports - the main source of government revenues - to zero.

Talking to reporters aboard Air Force One on the way to Washington from Florida on Sunday, Trump stood by his remarks to include cultural sites on his list of potential targets, despite drawing criticism from US politicians.

Democratic critics of the Republican president have said Trump was reckless in authorizing the strike, and some said his comments about targeting cultural sites amounted to threats to commit war crimes. Many asked why Soleimani, long seen as a threat by US authorities, had to be killed now.

Republicans in the US Congress have generally backed Trump's move.

Trump also threatened sanctions against Iraq and said that if US troops were required to leave the country, Iraq's government would have to pay Washington for the cost of a "very extraordinarily expensive" air base there.

He said if Iraq asked US forces to leave on an unfriendly basis, "we will charge them sanctions like they've never seen before ever. It'll make Iranian sanctions look somewhat tame."