Now you can watch Makkah's glory on big screen in Dubai 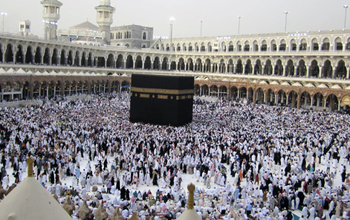 For the first time in the UAE, people - including non-Muslims - who have never visited Makkah, can experience the holy city like never before as the Islamic Information Centre in Dubai is set to screen the movie One Day in the Haram.

Packed with insider knowledge and information, this unique documentary sheds light on the most sacred place on Earth, offering us an exclusive look at the inner workings of the great mosque of Makkah, also called Al Haram Mosque (which means the sacred mosque in Arabic), through the eyes of the people working there. The Haram mosque is the largest in the world, and surrounds Kaaba.

British filmmaker Abrar Hussain, who is the director of the film, spent over a year researching different aspects of the great mosque of Makkah to bring out the most complete and compelling vision of the Haram ever produced. "We went through a very rigorous research phase, where I researched every aspect of the Haram, and interviewed countless workers before deciding on what aspects would be filmed," he said.

Talking about the film, Hussain told Khaleej Times: "The film covers all aspects of the Haram from the perspective of the people who work there. The film goes into incredible detail about the departments and the processes that run the Haram on a daily basis. Some of the departments featured in the film include the Imam Department, Zam Zam Department, the Religious Affairs Department, the Kiswah factory, the Haram's maintenance and IT departments, the social media department, and the online Quran teaching department. The film also shows in great detail the religious aspects of the Umrah, and features a section on the current expansion of the Haram."

Every year, millions of pilgrims come from all over the world to visit this holy city, and the film looks at the logistics and processes put in place to cater for the service of so many people. While focusing on the different departments within the Haram, it brings to light some of the human characters responsible for the running of this huge institution. "The film also discusses important issues related to the love Muslims have for this holy place, and we see some of the Islamic rituals associated with the Haram. We seek to explain to a non-Muslim audience some of the history and traditions behind it," he said.

It is 90 minutes in length and structured around the five daily Islamic prayers. The main aim of the film, Hussain said was to show how successfully the Haram is run, how efficeintly organised its departments are, and how seriously its workers take their jobs.

"The Haram represents the source of Islam, it's the birthplace of the religion, and up to now it has been pretty much an unseen world, something not properly documented. So I think one of the main aims of the film was to reveal Makkah to the world, to produce something that had not been experienced by audiences before."

"I see the film as a beautiful way to share the beauty of Islam, so that a non-Muslim can watch it, and learn something about the religion, and get a sense of how peaceful and tolerant Islam really is. I also hope the film provides an inspiration to the millions of Muslims around the world who yearn to visit Makkah, but have not yet had the opportunity to do so."

The film will be screened on Friday at the Madinat Jumeirah Theater (shows at 2.30pm/5pm/9.30pm). Tickets can be bought on www.islamicic.com/oneday at Dh50.

Director of Islamic Information Center Rashid Al Junaibi said: "The moment we saw the trailer we knew that we want to get the screening rights for the movie in UAE. The Center sees this movie screening as an opportunity to share the message of Islam and showcase a place loved by millions of Muslims across the globe.

Now you can watch Makkah's glory on big screen in Dubai