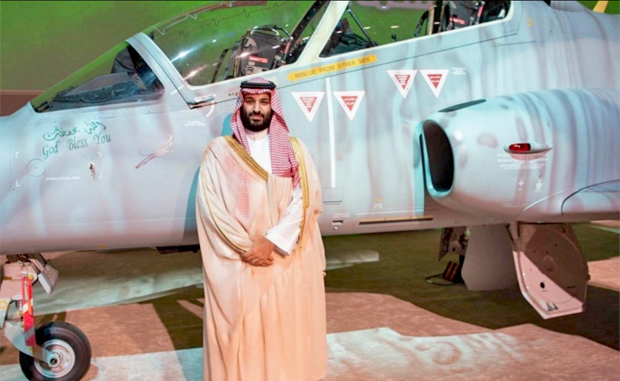 Crown Prince Mohammed bin Salman unveiled the plane during a ceremony at King Abdulaziz Air Base in the Eastern Province, witnessed by princes and officials.

The crown prince, who is also deputy prime minister and minister of defense, was briefed on the stages of assembling and manufacturing the main parts of the aircraft.

More than 70 percent of the project's work force are Saudi youth, who are assembling 22 Hawk aircraft after more than two years of training at the hands of international expertise.

The Saudi-British Defense Cooperation Program, in collaboration with BAE Systems (BAE Systems), oversaw the training of Saudi youth with the participation of more than 25 national companies.

After the assembly, the plane was rigorously tested and accepted after it passed.

During the launching event, the plane took off for its test flight after the Crown Prince gave the go signal.

In addition to the training aircraft manufacturing project, Saudi Arabia has launched its satellite and nuclear energy projects as part of a massive modernization effort under the Kingdom's Vision 2030 program.