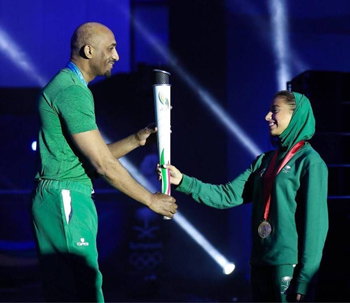 Attended by over 170 people, the highest record set at an LBS webinar, various topics were discussed including the Kingdom’s sports strategy, investment opportunities, role of the media and advantages of hosting international sporting events, among other things.

Saudi Arabia has recently presented itself as one of the major players in the global sports industry thanks to its transformative Vision 2030, which aims to diversify the economy and create a more vibrant society.

Recognizing the importance of the vision, Prince Abdulaziz said: “Vision 2030 is something we all believe in. Everywhere you go within the Kingdom, you feel that people are passionate about the vision and its targets. Sport is part of it, and it has a big role in it.”

At the heart of the newly created Ministry of Sport’s strategy is increasing mass participation across all types of sports and preparing the next generation of elite athletes capable of competing on the international stage.

The ambitious prince asserted, “We want to make sure that we create an ecosystem that is sustainable, creates jobs, income and provides a lot of opportunities for everyone. We are creating academies around the Kingdom for kids to get into sports to make sure we have a base for them to start off from.”

Over 50 questions were addressed during the open and transparent webinar, a reflection of the attitude and culture the prince is creating at the Ministry. He admitted that while Saudi Arabia is a nation bound by a love and passion for sport, until recently sports has been looked at as a tool for entertainment rather than an important industry.

One of his key goals is to shift this mentality. Hosting major sports events has greatly contributed in doing so, he is a strong believer of their long-lasting impact and legacy.

“These events will shed light on enlightening people about certain sports and making sure they get attracted by it and enjoy it. From these events that we hosted, we found out there’s interest for tennis, golf, and boxing.”

A former professional motorsports racer, Prince Abdulaziz was appointed chairman of the then-General Sports Authority at the start of 2019 after holding the position of vice chairman for the previous two years. Under his leadership, the Ministry of Sport doubled the number of its ever-growing sports federations and invested heavily at the grassroots level.

When asked about the significance of such investments, he said: “We give them [athletes] an opportunity to compete under the name of the Kingdom, to shine and make sure there’s a future for them. Today we look at a holistic view of sports. We use it to change certain mindsets and restrictions within the Kingdom to make sure we can evolve within the industry and complete against leading countries.”

The Riyadh Chapter of the London Business School aims to increase engagement and opportunities for LBS alumni in the Kingdom and to develop stronger ties that help build a better future for the business community.

Co-presidents Majed Al Hugail and Faris Al Shareef expressed their delight in hosting Prince Abdulaziz for the first time by saying: “The webinar was very insightful to the elite group of LBS alumni both locally and internationally. It helped them further understand how the Ministry is reshaping the sports sector as part of Vision 2030.

“The session left many of the attendees with a great sense of appreciation of the Ministry’s support to the community, an area where stronger partnerships can potentially be explored for the country and region’s benefits.”

In line with new progressive government policies, a lot of attention and investment has geared towards the inclusion of women in sports on both the elite and amateur levels.

When asked by an audience member about this matter, the sports leader proudly replied by saying: “We’ve seen an increase of active women participation in sports by about 149% from 2015 till today. Only five years ago, women were not allowed to participate in the street but it’s a completely different ball game today.”

A testament to this great progress is the participation of 22 women’s national teams in competitive regional games across a wide range of sports in recent years, in addition to newly incepted Women’s Football League.

Among the topics discussed during the 1-hour long webinar was the Ministry’s journey towards the privatization of some of its assets.

He continued: “It is our role to provide the right regulatory process. Today we are ready with a platform to make sure that we can deliver on this for the private sector and for the public. This will add towards the evolvement and the development of sports within the Kingdom.”

Saudi Arabia’s successful hosting of high-profile sports events attracted thousands of locals and visitors; it now has bigger plans to cement its strong position in the global sports industry. Among these plans include bids for two of the continent’s most sought after competitions, the 2027 AFC Asian Cup and 2030 Asian Games.

When asked about the reason behind them, he was confident in his response highlighting that Saudi Arabia has celebrated multiples trophies and medals in the past, but this is the first time that they’re aiming to host the events.

“It is time to do so. It’s unheard of that you win a competition but don’t host it. Saudi should host these events and we are capable of hosting them as a nation. It is something that our people are very passionate about, they love it and follow it. It will showcase what Saudi can do on the Asian front.”

Prince Abdulaziz recognizes Saudi Arabia’s recent sporting achievements, but he remains humble on his mission to use sports as a tool to tell his country’s story to the world and build a healthier, more vibrant society capable of nurturing athletes who can compete on the elite level for many years to come.