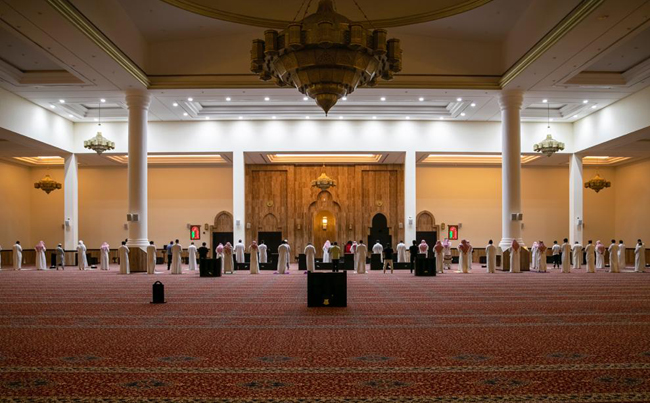 Riyadh, May 31: Over 90,000 mosques in Saudi Arabia reopened their doors to worshippers on Sunday morning after over a two-month closure as part of an ease in the curfew restrictions to prevent the spread of the novel coronavirus.

The worshipers were allowed to enter the mosques, except the mosques in Makkah, from Fajr prayers today morning (Shawwal 8) with a limit of 40 per cent capacity.

The reopening of mosques was be undertaken in accordance with the guidance of Minister of Islamic Affairs, Dr Abdullatif Al Asheikh, and in line with advice issued by the Senior Council of Ulemas.

The ministry has embarked on a vigorous media campaign to urge all worshippers to abide by preventive measures for their own safety to curb the spread of Covid-19.Among the instructions are doing ablution at home, hand-washing and using sanitisers before going out to the mosque and after coming back home.

On Saturday, the Custodian of the Two Holy Mosques King Salman has approved opening the Prophet's Mosque in Madinah in stages to the public.

The elderly and those with chronic diseases are advised to perform their prayers at home. Reading and reciting the Holy Quran online is advised, too, from one's own mobile phone or at least reading from a privately owned copy of the Holy Quran.

Bringing one's prayer mat to perform prayers in mosques is highly recommended as well as keeping a two-metre distance between one another prayer.

Accompanying children under the age of 15 to the mosques is prohibited. Putting on a face mask and avoiding shaking hands and other contact is also recommended.

Meanwhile, the ministry managed, during the closure of mosques, to undertaking a massive cleaning, sanitising and maintenance drive in all mosques Kingdom-wide, according to world-class standards and best known practices. This included sanitising over 10 million mosques, 43 million copies of several sizes and volumes of the Quran, more than 600,000 Holy Quran cupboards, in addition to repairing and maintaining about 176,000