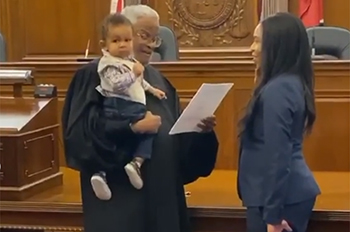 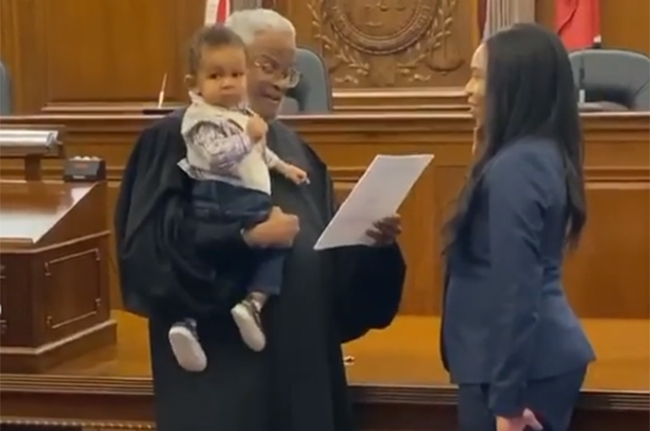 Washington D.C., Nov 13: While being a mother is nothing less than a blessing for many, getting sworn into a profession with their little one as the witness could make it an "indescribable" feeling.

One such video is making rounds on social media, where a lady is being sworn in as a lawyer while the judge holds her baby, and it is, undoubtedly, winning hearts.

State Court of Appeals Judge Richard Dinkins is seen bouncing the kid in one arm while he reads the oath of admission to Juliana Lamar.

Shared on Lamar's Instagram handle a few days ago, the clip has garnered over 70,000 views after her law school colleague, Sarah Martin, re-shared it on micro-blogging site Twitter.

Opening up about how did this happen, Lamar told Fox 17 Nashville that Judge Dinkins saw her son, Beckham, in the crowd and expressed that he should also be a part of her mom's swearing-in, cited Fox News.

Moreover, Dinkins has been a mentor to the new attorney Lamar, who clerked for him during law school at Belmont University College of Law.

Lamar was a student when she was carrying Beckham who took birth last year on October 20.

She expressed that being a mom together with law school was "nerve-racking" and added, "I didn't know anything about babies. I was worried about law school and being a new mom."

Needless to say, having her son be a part of the event was "the pinnacle of everything because it was all worth it," she said.

Lamar also documented the ceremony and penned her feelings on Instagram where she wrote, "This feeling is indescribable. To say you're going to do something then do it is such an amazing feat."

This feeling is indescribable. To say you’re going to do something then do it is such an amazing feat. There were a few times during this journey that brought me to my knees asking God for strength and reason. I’m glad he heard every prayer!! I’M A LICENSED ATTORNEY!! Today, I was sworn in to the Tennessee Bar by my mentor, Judge Dinkins, who has helped and guided me into my legal career, and my baby boy Beckham, who motivates me to keep going everyday and has been with me during half of my law school “experience.”Thank you to my Husband for being there during all the late nights, all the suits you’ve ironed , coffee you’ve bought to keep me awake, and taking my laptop to force me to go to sleep. Thank you to my Mom, for believing in me, knowing my potential, and (trying) to make me not be so hard on myself. Thank you all for your love and support.

A lot of people on social media eulogised the judge's humane gesture and many women calling Lamar a hero!
"Great example of true gender respect in the workplace [sic]. This woman is given space to live her full life," one person tweeted.

"She can and will practice law while being a parent, and that judge is modeling what it means to be a professional human rather then [sic] a professional and a human. Bravo to all!"
Another Twitter user wrote, "There should be a Presidential Good Humanity Award for this kind of thing. For mom too, what a way to persevere."

"What a day to be sworn in and have your little one be there too!!" another person tweeted. "What a memory to show her baby when the baby gets older!!"