Bengaluru, Mar 6: The police have busted a multilevel marketing scheme racket running under the name Indus Viva and arrested 24 offenders including the CEO, COO of the Bengaluru based company.

Police stated that the offenders have cheated about 10 lakh people, collecting amounts to the tune of Rs 1500 crore.

According to Cyberabad police commissioner VC Sajjanar, Indus Viva enrolls members into its binary schemes with a Rs.12500 fee providing a 100 value points initially. Members have to enroll new members to earn bonuses and are encouraged to make more members in a swift manner to earn more. A member can earn Rs 2,56,000 by making 256 persons join the scheme in nine weeks.

Indus Viva also offers President Club Member Plan under which one can join by paying Rs.1.5 lakh. The company provides them with 50 beauty, health, dietary products priced at Rs 3597 each and in addition offers products worth Rs 25,000 free. A person joining PCMP is attracted with “an opportunity to dine with the CEO in Bengaluru.”

The company conducts star summits annually in prominent hotels in Bengaluru or other cities. They also provide training sessions for members to skill them to make more members join the schemes. They claimed that the company has branch offices in the USA, Uganda and Bangladesh and that they want to expand the business worldwide, Sajjanar told reporters on Saturday.

Indus Viva has its own production unit named Olive Life Sciences located at Nelamangala, Bengaluru. But these health & beauty products are not recognized/certified by any government department liable to be confiscated under the Drugs and Magic Remedies (Objectionable Advertisement) Act 1954.

“Women in particular are targeted by these companies with false claims and blatant lies and thereafter are exploited in different ways. The public is advised not to fall prey to these dubious schemes offering easy and quick money and advised to take the local police assistance if they suspect any such activity,” the economic offences wing sleuths of the Cyberabad police caution.

The Cyberabad cops were acting on a complaint received in Gachibowli PS in February. The complainant stated that lured with an attractive income offer for promoting the company products like coffee, juice, he had invested Rs.12,500 but realized that he was cheated by Indus Viva.

A case was registered under 406, 420 IPC and various sections of the Prize Chits and Money Circulation Schemes (Banning) Act 1978.

Bengaluru, Apr 13: Amidst continued threats of covid-19, the government of Karnataka has issued special guidelines for Muslims during the month of Ramdan. As per the guidelines, masjids in containment zones to remain closed till the zone is denotified, large gathering continues to remain prohibited, face masks mandatory.

Here is the complete guidelines: 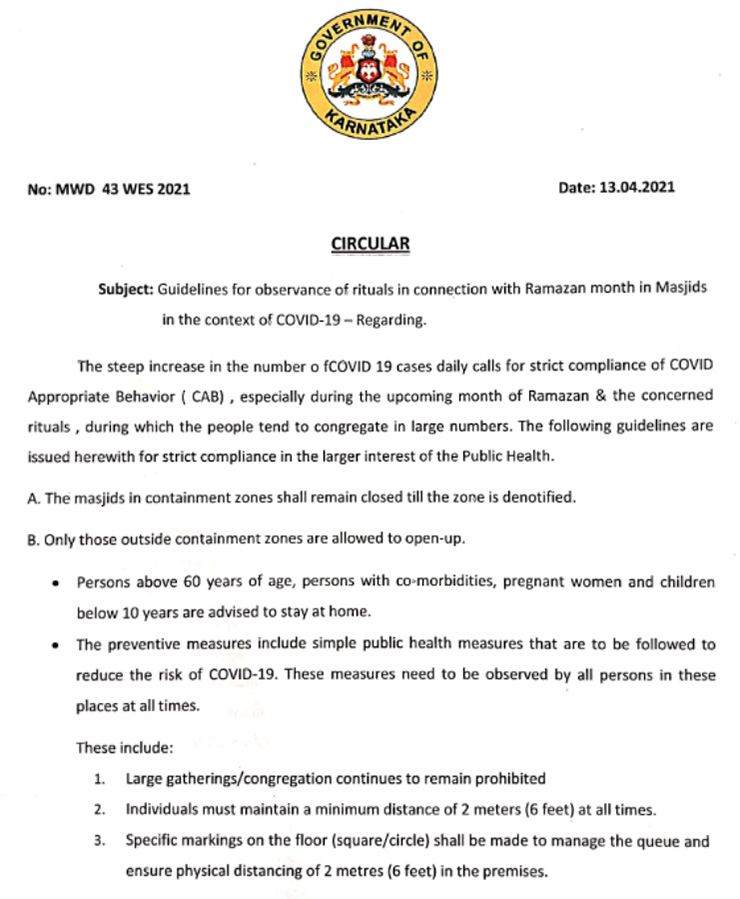 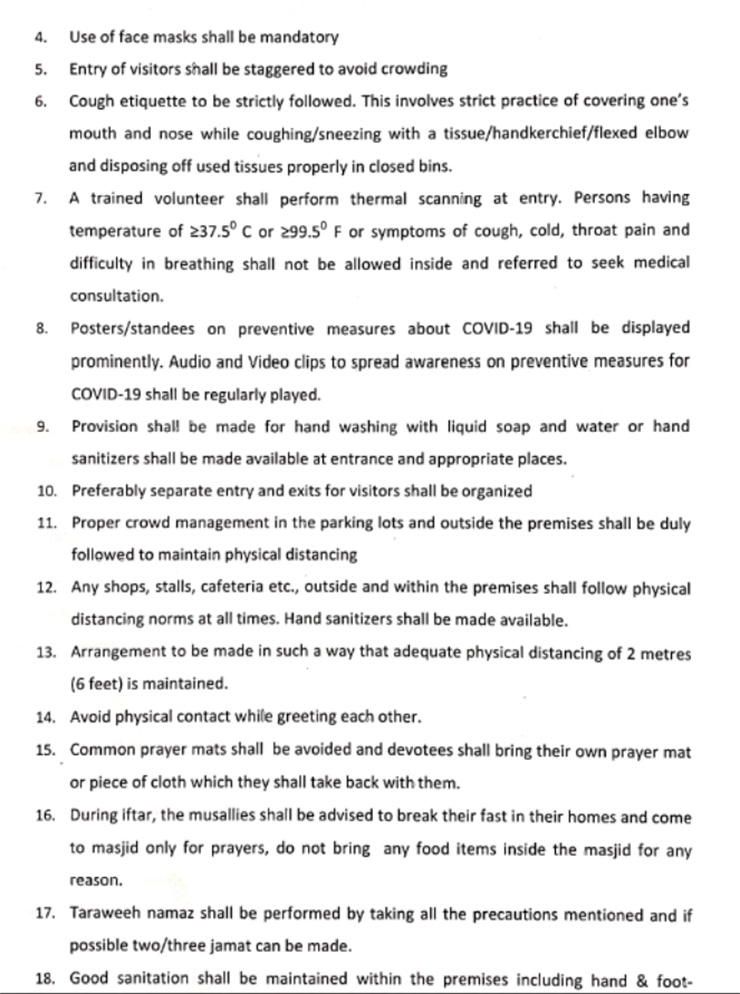 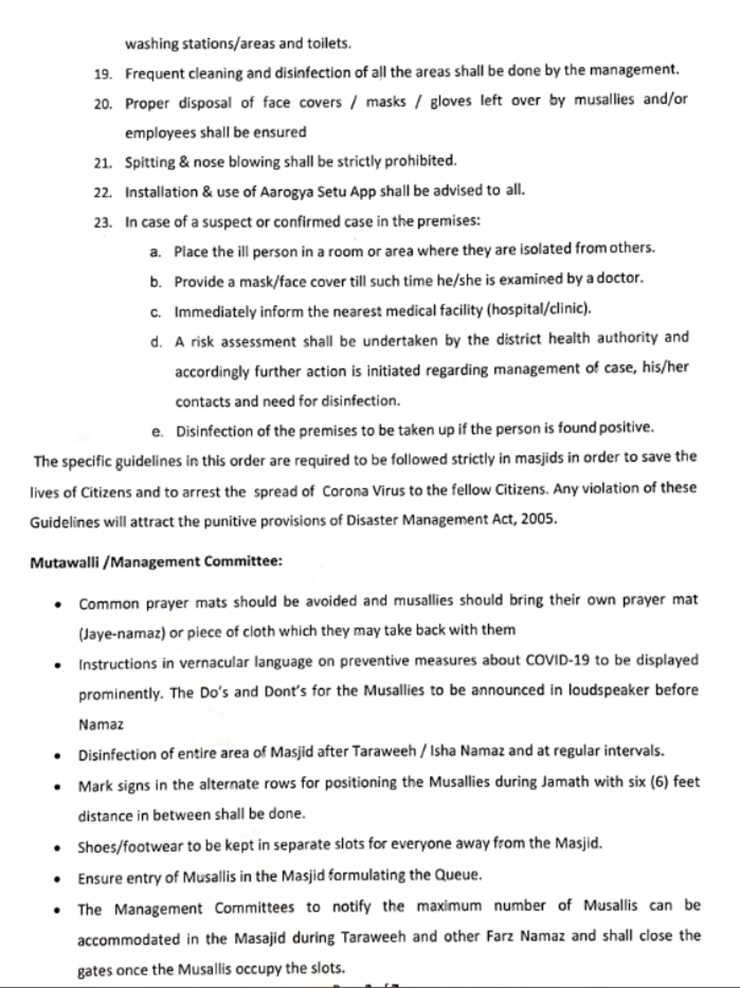 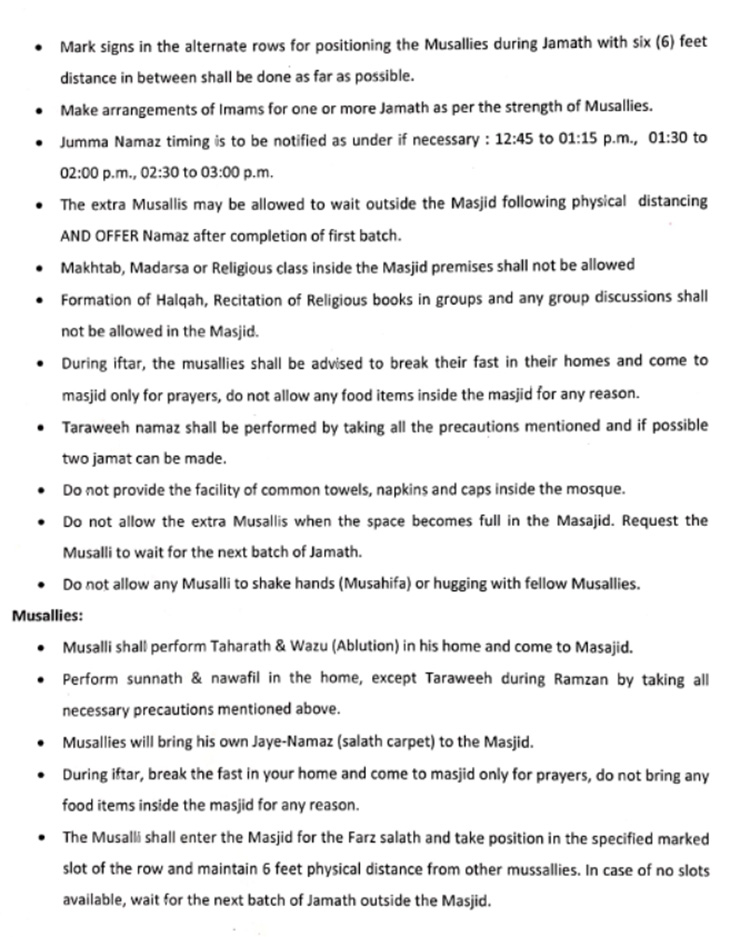 Now, covid negative report must to enter Mysuru from Bengaluru

Mysuru, Apr 8: As Covid-19 cases surge in Karnataka, especially in Bengaluru urban, people coming to Mysuru from the state capital have been advised to get Covid negative report.

Deputy Commissioner Rohini Sindhuri has suggested people travelling to Mysuru carry a test report. The DC said a large number of people travel between the two cities for business and other purposes.

The DC also made it mandatory for tourists to carry a negative report.

"In this regard, it is appropriate for those travelling to Mysuru district from Bengaluru to have a Covid-19 negative report (not older than 72 hours). It is hereby requested to cooperate to control the Covid-19 spread by following the advisory," it added.

Speaking to reporters, the Deputy Commissioner said that those going to tourist spots, convention and party halls, recreational clubs and cinema halls will have to carry Covid- 19 negative reports, from April 10 to 20 in the wake of Ugadi festivities and related holidays.

"Though we are not closing down any of the tourist places, as many tourists are coming in, wherever people gather, a negative report is to be carried," she said.

Mangaluru: The Mangaluru city police have seized nearly 68 vehicles, including 64 two-wheelers, for violating the night curfew imposed by the government on Saturday.

The police had set up 42 checkpoints across the city, and motorists were stopped at prominent junctions, and allowed to go only after producing valid documents after 10 pm. The clamping of night curfew in the city witnessed traffic snarls at many places, and commotion prevailed at a few places, when people were not allowed to move after 10pm.

While many questioned the police for not allowing them to return to their homes, those working on night shifts expressed their anger, when they were stopped even after showing their identity cards.

Former minister B Ramanath Rai too expressed disapproval over police blocking the vehicles, by placing barricades at Padil on the outskirts of Mangaluru.

Noticing traffic congestion on the road, due to the night curfew enforced by police, Rai alighted from his car and urged the police to remove the barricades, to facilitate easy movement of vehicles.

City police commissioner N Shashi Kumar said that some inconvenience will be experienced by residents on the first day. “I have seen a few instances, where the public have also been behaving objectionably,” he said.

60 Home Guards deputed: Based on the request of the Dakshina Kannada district administration, the state government has deputed 60 Home Guards to play the role of marshals in Mangaluru city, to enforce Covid-19 regulations. The Home Guards will be helping the police to ensure people wear masks, maintain social distancing and prevent unnecessary travel in the city.

The government has also deputed 10 Home Guards each to Ullal and Puttur city municipalities, five each to town municipalities of Bantwal, Moodbidri, Someshwara and town panchayats of Kotekar, Mulki , Belthangady, Vitla, Sullia and Kadaba.