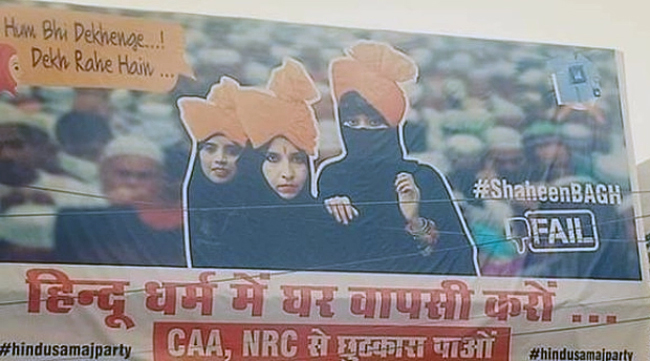 Varanasi, Jan 20: An FIR has been lodged against unidentified persons for a controversial hoarding near the Varanasi railway station. It is worth mentioning here that Prime Minister Narendra Modi himself is the MP of Varanasi Lok Sabha constituency.

Inspector Ashutosh Ojha said that the FIR under section 295 A and 505 of IPC has been lodged.

"Investigation has been launched in the case and those involved in putting up the hoarding would be identified soon," he added.

According to sources, a lesser known outfit, Hindu Samaj Party, had placed the hoarding on the busy road.

The outfit's state Vice President Roshan Pandey had made a video viral on social media with his message in which he claimed to have put up the hoarding in response to the protest being staged at Shaheen Bagh, New Delhi.

The hoarding, which also has photographs of some Muslim women wearing saffron pagdi, was removed by the police late Saturday evening.

It came up at a time when Chief Minister Yogi Adityanath, Union Minister Smriti Irani and other leaders were in Varanasi to address a rally in support of the Citizenship Amendment Act at the Sampurnanand Sanskrit University.

Pandey, along with his supporters, had also tried to stage a sit-in at Lanka to give a call for marching to Shaheen Bagh in Delhi but was prevented by the police.