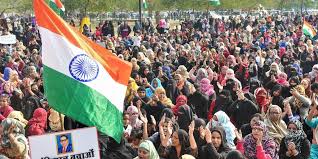 Newsroom, Jan 26: An Indian Muslim youth who had applied for a job in Dubai has been left aghast after his prospective employer, who happens to be an Indian, mailed back chiding him for looking for work and suggested that he should make a living (sic) by joining anti-CAA protestors in Shaheen Bagh in New Delhi.

Abdulla S.S, a 23-year-old youth from Kerala, who had applied for a mechanical engineer’s position in Dubai said he is still reeling from the shock of the email he got from UAE-based Indian expat Jayant Gokhale in response to his job application last week. 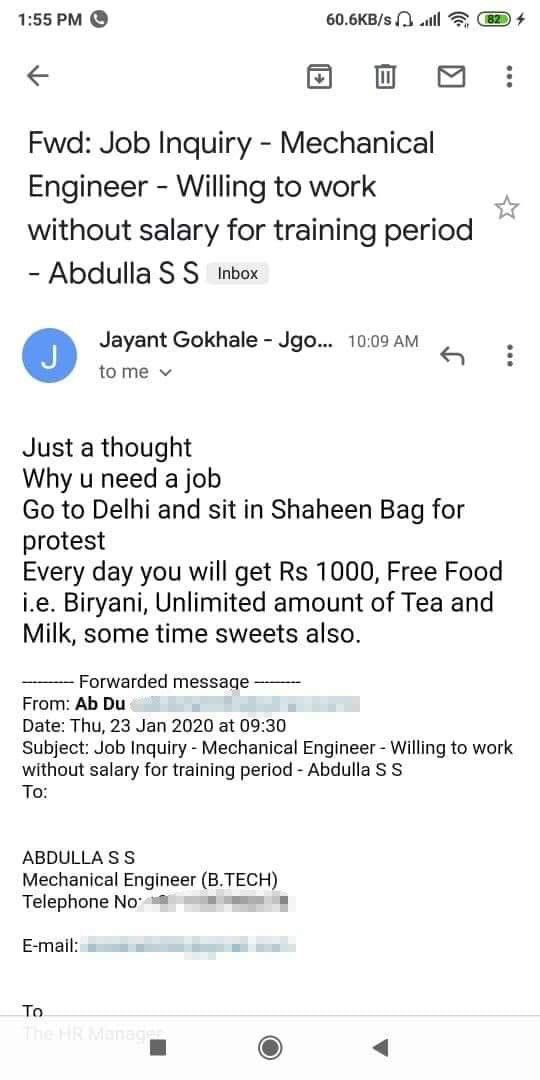 “Just a thought. Why u need a job? Go to Delhi and sit in Shaheen Bagh for protest. Every day you will get Rs 1000. Free food i.e Biryani, Unlimited amount of Tea and Milk, some time sweets also,” Gokhale said in the email which has since gone viral.

Scores have shared the email on social media seeking action against Gokhale who runs a consultancy in Dubai. Many said the email is offensive on two counts. First, it ridicules and discriminates a job seeker on the basis of his religious identity and, second, it undermines the credibility of Shaheen Bagh protestors by suggesting that they are being paid to sit in.

Abdullah said he’s sad and appalled. “I shared Mr Gokhale’s email with some friends. Who would have thought it would go viral. I don’t want any controversy. All I want is a job,” he was quoted as saying.

“I am suffering from ill-health and undergoing dialysis. My email is being blown out of proportion. I didn’t mean what I wrote,” Gokhale was quoted as saying by a Gulf based newspaper.

“My message to candidate was not intended to hurt anyone in any manner or discriminate. I have already sent apology message to the concerned person [Abdullah],” he said in the email reproduced here ad verbum. “I very much value UAE’s outlook, policies and culture. I do not in anyway like to go against values of UAE. In fact I am very thankful to UAE for looking after my health,” he added.

This hate monster is commenting as if his Father and God Father are financing the people agitating agaisnt CAA/NCR.    How about the bjp candidates who are distributing money among voters.   Video is viral showing ladiest from bjp distributing cash to people for voting bjp in delhi election.   EC should take note of this and ban bjp from contesting as its against our constitution.   bjp is doing everythign agaisnt constitution and labels others as anti indians.   bjp nhever honours or accept indian constitution.   CAA is the proof for it.   CAA is 100 perent agaisnt our constitution.   Shame on you bjp.    We should unite and make bjp lose all the seats.

put him in UAE jail to get free biriyani

It is no wonder that this character is undergoing Dialysis. With the hate mentality that he is carrying, it is not wonder that GOD has given him punishment in the form of non-functional kidney. His apology is fake, the moment he lands in Mubai, he wil wag his tale again in his pathological hate for Muslims while licking mUslim shit.

i appeal UAE govt to gave him severe punishment and sent him back with life ban to uae ...

HYpocricy is one thing common among all RSS terrorists

he says that he he is suffering from dialysis...why he hate muslim people and the people who protest the anti nation BJP party.

if his heart is clean GOD will defenitly give him good life till his death...look at LK advani now..the man who mastermind in demolishing baber masjid now wher he is...GOD humiliate him every minuite in all aspect..GOD knows how he is going to die...

so love human who ever it is...hindu, muslim chist, jain, sikh etc..

all are the creation of one GOD..help each other and be happy..

this type of people is very shrewed - follow RSS teaching - eating muslim nations food and blame them only.when tough time comes, start to beg again... he is one of them.. currupt mind blind bhakt.. just imagine if was not in UAE he would not even says sorry....i condemn his statement

It is really a Shameful comments of Kokhle, very bad to have such kind of people in the society, people should understand and bycot his business and seize his license.

I believe the UAE will adhere to its rules and regulations to everyone. Should take strict action and put him under in Jail. Take a huge penalty from him.