In 100 days CM Kumraswamy visited 47 temples, a dargah, a church and a mosque 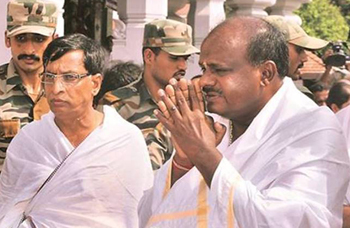 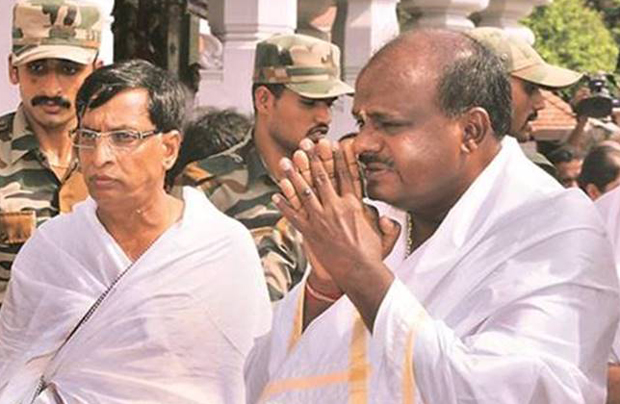 Bengaluru, Aug 30: Karnataka Chief Minister HD Kumaraswamy completes 100 days in office today. But there is no enthusiasm among the party cadre and the celebration is muted across the state. Apart from the lack of coordination, and mutual distrust between the coalition partners, the recent floods in Kodagu and neighbouring districts, and unending draught in parts of the state have dampened the spirit of the government.

Neither JD(S) nor Congress is sure of a smooth running of the government in future, as BJP has continued its efforts to topple it. “Kumaraswamy has been caught between managing the coalition within his party and between parties,” says, A Narayana, political analyst and faculty at the Azim Premji University, Bengaluru. The chief minister has to balance the aspirations of his family who include former prime minister H D Deve Gowda and public works department (PWD) minister H D Revanna, with that of the Congress.

It seems however that Kumaraswamy, who had recently declared that he would not make any attempt to “save” his position, is seeking divine intervention to address his challenges instead of engaging in politics. This time he has apparently given priority to “deity darshan” over “janta darshan”. In the 100 days, he has paid obeisance at 50 places of worship; at 47 temples, a dargah, a church and a mosque.

“The kind of maturity that was visible when he was CM for the first time (2006) is not visible this time,” Narayana said referring to coalition management.

According to JD(S) sources, Kumaraswamy is still being wooed by the BJP leadership and he is not averse to the idea of aligning with them if the Congress pulls the plug. But he does not want to end the present arrangement with them based on mere speculation.

Kumaraswamy, who refers to himself as ‘Sandarbika Shishu’ (child of circumstances), has more often displayed his helplessness than contain the dissenting voices that could damage the prospects of the alliance.

As many as 105 urban local bodies are going to vote this Friday and results would be out on next Monday. Keeping local factors in mind, the Congress and the JD(S) are fighting separately. If they manage to win at least 50% of seats together, the alliance will get a boost. If they fail to do so, an emboldened and reenergised BJP may come out with a new plan to end the rule of JD(S) and Congress in Karnataka.

In 100 days CM Kumraswamy visited 47 temples, a dargah, a church and a mosque

In The News
Special
Top Story