Kasaragod, May 15: The Crime Branch team probing the twin murders of Youth Congress workers Kripesh and Sarath Lal at Kallyot, near Periye, here has arrested two local leaders of the CPI(M) here on the charges of helping the accused escape and destroy evidence. 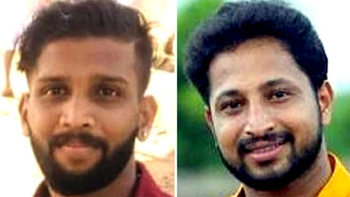 According to the police, the accused involved in committing the crime had gone to Velutholi, near Udma, and met Manikandan. He, along with Balakrishnan, had helped them to go into hiding.

They were charged under Indian Penal Code Sections 212 (harbouring offender) and 201 (causing disappearance of evidence of offence). The arrest of the two leaders followed their interrogation earlier in connection with the case.

The two YC workers were hacked to death on February 17. The investigating team headed by M. Pradeep, Deputy Superintendent of Police, Crime Branch, Malappuram, had earlier arrested 10 accused including CPI(M) local committee member A. Peethambaran, the alleged kingpin in the murder case, and six others who were alleged to be directly involved in the murders.

One CPI(M) worker, Subheesh, who was arraigned as an accused directly involved in the murders, is absconding.

As many as 150 witnesses have been questioned and their statements recorded, according to the police. In an affidavit filed by the investigating team in the Kerala High Court, Manikandan had advised the accused to change their clothes and hide the weapons.

The arrest is seen as an embarrassment for the CPI(M) which had stated that the party had no role in the twin murders.

The families of the slain YC workers had been alleging that the murders had been carried out with the knowledge of the party leadership here.

In their statements to the Crime Branch, they had named Udma MLA K. Kunhiraman and former MLA K.V. Kunhiraman as having connection with the crime.