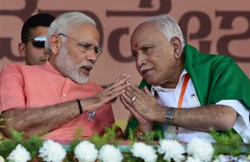 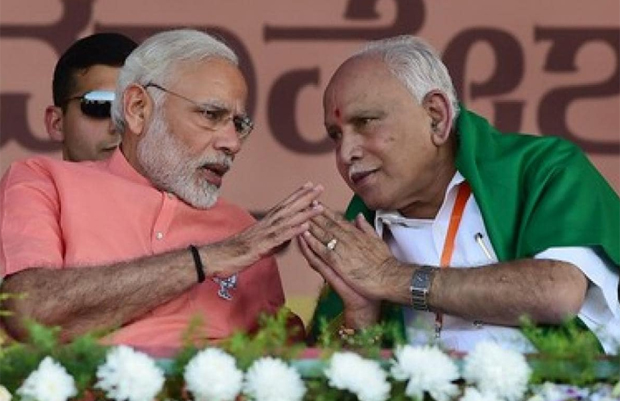 Bengaluru, Jun 2: Karnataka Chief Minister B S Yediyurappa on Monday claimed 70 per cent of the people of the country want Narendra Modi to not only complete the current term, but also want him as the Prime Minister for the next term.

"70 per cent of the people of this nation want Narendra Modiji not only to complete this term, but also want him as the Prime Minister for the next term, so that he can find solution to the problems faced by this country. This is the aspiration of the young India," he said.

Mr Yediyurappa said PM Modi has successfully completed one year of the second term and the country is surging ahead in the path of progress under his "exceptional and far-sighted leadership."

"The Prime Minister is leading the country forward towards development with his Sab Ka Saath, Sab Ka Vikas, Sab Ka Vishwas principle and inclusive schemes," he said, adding that PM Modi is spearheading the cause of building a "strong and self-reliant Bharath."

Speaking to reporters in the backdrop of the one year of the Modi government''s second term in office, the chief minister said Modi is recognised as an exceptional leader not only in India, but also at the global level, through his mantra - Vasudaiva Kutumbakam.

Mr Yediyurappa termed the PM "iron leader" for scrapping Article 370 that terminated special status to Jammu and Kashmir, and formation of Jammu- Kashmir and Ladakh as Union Territories.

He listed the key decisions of the BJP-led central government such as banning the practice of triple talaq among Muslims, the Vande Bharath Mission, the Citizenship Amendment Act, one country-one ration card scheme, new Motor Vehicle Act, besides also "finding solution to Ram Mandir issue" , among others.

Mr Yediyurappa said PM Modi's decision has played a decisive role in dealing with the COVID-19 situation in India. He has competently handled a huge challenge of combating the coronavirus in a country with a population of 130 crore.

"He implemented the most stringent lockdown restrictions in the world to control the spread of COVID-19 and achieved remarkable success," he said, and lauded the Rs 20 lakh crore package that has been announced to revive the economy amid the pandemic.