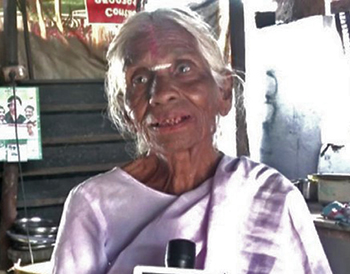 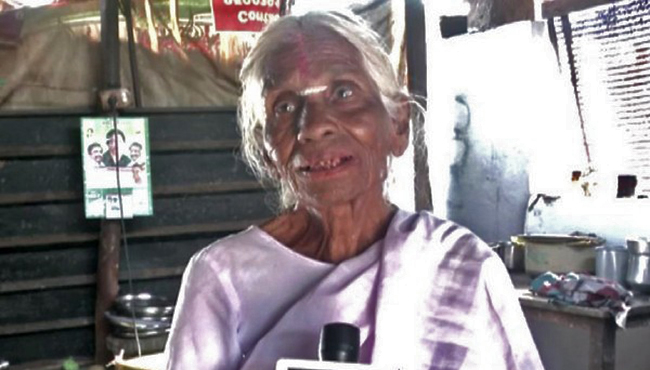 Coimbatore, Sept 14: The indomitable spirit of an over 80-year-old woman in Tamil Nadu who has been selling idlis for just Re 1, for more than two decades now, has touched the hearts of many in the country ever since her story became viral on social media.

The octogenarian, Kamalathal says the mere happiness she derives in serving food at such price, earning just enough for a livelihood and contributing her bid to humanity are reasons enough for her to continue.

"I have been doing this for the past 20 years now and don't know how long this will continue. I don't have anybody in my family. I am alone. I earn Rs 200 daily. I don't aim to earn money out of selling idli at this price," says Kamalathal.

"If I had aimed to become a crorepati by doing this, I could have done that in these many years. But, I decided, no, I only earn my small livelihood," says the woman who is popularly known as the 'Re. 1 idli granny'.

With her wrinkled face and bony slender frame, Kamalathal dons spectacles and a slight hunchback as she goes about preparing idlis after waking up before the crack of dawn, working from 5:30 am and continues till noon.

Through the day she sells about 400-500 idlis and earns a mere Rs 200, which, she believes, is a modest amount for her to live on.
"I am happy when people come to me and I serve them piping hot idlis," says the 82-year-old.

Kamalathal. "I serve them idli with chutney and sambar which I prepare myself. if I had to go and earn for my livelihood, I could go out and earn Rs 200 daily, but the same amount I earn by doing this. I sell 400 to 500 idlis daily and only earn the amount which I require."

This inspirational story came to light when Anand Mahindra, the chairman of the Mahindra Group recently took to his Twitter account to share a video of her preparing idlis on a wood-burning stove and serving them to underprivileged people.

"One of those humbling stories that make you wonder if everything you do is even a fraction as impactful as the work of people like Kamalathal. I notice she still uses a wood-burning stove. If anyone knows her I'd be happy to 'invest' in her business & buy her an LPG fueled stove," the text accompanying the video read.

Kamalathal was flooded with offers of help from across the country after the video went viral, including from Anand Mahindra himself, who said that he was willing to "invest in her business and buy her an LPG." The gas connection was soon issued to her by Bharat Petroleum Corporation Limited.

Kamalathal says that she finds the true reward of her selfless hard work when people appreciate her food.

"I came to this place hearing so much about these tasty idlis," says one of the customers. "I did not believe the idly was served at Re 1 until I came here. I do not know how this lady is selling them at such price, and that too such tasty idlis.