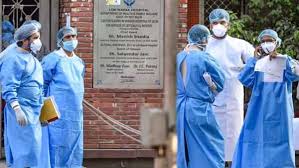 Bengaluru, May 24: With 130 new cases, Karnataka's COVID-19 tally crossed the 2,000-mark on Sunday. Most new cases reported have interstate travel history with 97 coming from Maharashtra. The number of active cases in the state is 1,391 and the deaths reported so far is 42, including 2 for non-COVID reasons.

"Ninety seven of the 130 new patients are returnees from Maharashtra, the worst affected state in the country with 47,190 cases till Saturday," said a state health official.

Forty six patients were discharged from hospitals on Sunday taking the number of cured persons to 634. Of the 46 discharged, 18 are in Davanagere, 20 in Uttara Kannada, 4 in Chitradurga, 3 in Bagalakote and one in Haveri.

Chikkaballapura is the home district of Medical Education Minister K Sudhakar, a doctor by profession, who is spearheading the fight against the pandemic.

On Saturday, the state's tally shot up to 1,959 due to 196 new cases, the highest single-day rise, with 195 of them crossing over from Maharashtra through the inter-state border, which was opened up as part of partial relaxation of the lockdown.

The Karnataka government has imposed institutional quarantine on persons traveling in from outside the state, particularly by flight from Maharashtra, Gujarat, Tamil Nadu, Delhi, Rajasthan, and Madhya Pradesh.