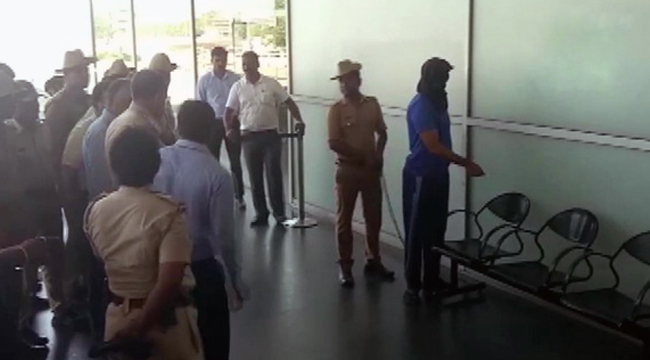 Mangaluru, Jan 24: Aditya Rao, who was arrested for planting Improvised explosive device (IED) at Mangaluru airport on January 20, was brought to the airport on Friday for recreation of the crime scene as part of the investigation process.

Yesterday, one more case was registered against Rao in connection with a hoax call to the terminal manager of the airport on January 20, police said.

"One more case has been registered against Aditya Rao at Bajpe Police station for a hoax call to the terminal manager of Mangaluru International Airport on January 20," said PS Harsha, Mangalore Commissioner of Police on Thursday.

Earlier, Harsha informed that Rao, who surrendered before the Bengaluru Police, is now in the custody of Mangaluru Police.

"Our investigation team arrested Aditya Rao in Bengaluru in connection with the planting of an explosive device at Mangaluru airport. We produced the accused before Bengaluru's first JMFC court and the court issued a transit warrant," Harsha said.

"We have brought him to Mangaluru from Bengaluru and now the accused is in our custody. Our investigation team will interrogate him. We will investigate all aspects. He will be produced before Mangaluru 6th JMFC Court," he added.

Rao hails from Udupi and has engineering and MBA degrees.

According to the police, the IED was recovered from a bag at the Mangaluru airport. It was later defused in an open field by the personnel of the bomb disposal squad.