Ahead of trust vote, rebel MLAs lash out at 'monster govt' 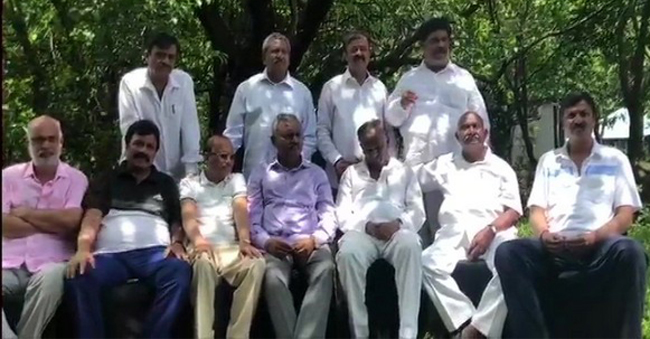 Mumbai, Jul 21: Ahead of the scheduled trust vote in the Karnataka Assembly on Monday, rebel JD(S) MLA H Vishwanath on Sunday termed the Congress-JD(S) coalition government in Karnataka "unholy", saying the dissident MLAs don't want this "monster government" to remain in power.

"We haven't come here for any other intention. We wanted to teach a lesson to this unholy coalition government. That is why we people (rebel MLAs) took this stand. We have resigned. We don't want this monster government," he said in a video message released by the rebel MLAs on Sunday.

In the video, Congress MLA Byrathi Basavraj also hit out at the coalition government, accusing them of trying to destroy the future of the legislators.

"People told us before the Lok Sabha elections that we should not support this government. We have many more things to say. We will come to Bengaluru once everything is sorted out. We haven't come here for money or other things. We have enough by god grace," Basavraj said in the video clip.

The Karnataka Assembly on Friday failed to meet two deadlines set by Governor Vajubhai Vala to complete the trust vote on that day itself after Chief Minister HD Kumaraswamy challenged the directive.

The trust vote was scheduled for Monday after the adjournment of the House.

Ahead of trust vote, rebel MLAs lash out at 'monster govt'