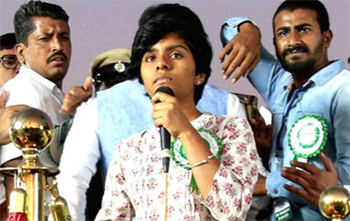 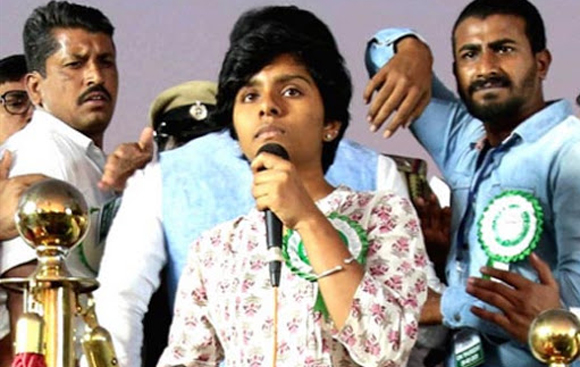 Bengaluru, Feb 22: Student activist Amulya Leona, who was arrested on sedition charge after she raised ‘Pakistan Zindabad’ slogans during an anti-CAA event at Bengaluru’s Freedom Park on Thursday evening, has now criticised the organisers of the event for snatching away microphone from her hand.

The event was organised by ‘Hindu Muslim Sikh Isaai Federation’. Soon after she started pro-Pak slogans All India Majlis-e-Ittehadul Muslimeen (AIMIM) chief Asaduddin Owaisi rushed and tried to snatch mic from her hand. When she continued to speak, her microphone was deactivated.

According to police, the 19-year-old BA journalism student blamed her predicament on the organisers of the protest for not allowing her to complete what she wanted to say on stage.

"Maybe she had intended to say what she had recently posted on her Facebook page where she has said ‘Zindabad’ to all the countries, including India and Pakistan. But it went awry. She was not answering any of our questions, but kept saying she had not done anything wrong," a senior police officer was quoted as saying by a news paper.

The police have booked Leona for sedition and promoting enmity between groups. After her arrest, she was thoroughly questioned by the police for over two hours. After recording her statement, the police produced her before a magistrate in the wee hours of Friday. When she was taken to the judge’s residence, located at the National Games Village in Koramangala, Leona pointed towards the TV cameras and flashed a victory sign.

As the police did not seek her custody, the judge remanded her to judicial custody and she was subsequently taken to Bengaluru Central Prison at Parappana Agrahara. Her advocate is expected to file a bail application in the court on Monday.

When the police took her into custody at Freedom Park and quizzed her, she reportedly did not answer any of their questions but kept insisting that she had not done anything anti-national to be charged with sedition.

"It was the organisers’ mistake to snatch the mike from me before I completed what I had to say. Because of them, I have been arrested today. If they had given me a chance to complete what I had to say, nothing like this would have happened. Now, there is no point in telling you what I intended to speak there. But I can say that there was nothing anti-national in what I did. You can initiate action against me and my advocate will fight the case," a source, citing Leona, said.

The police recorded whatever she said as her voluntary statement and submitted it to the magistrate. "We tried to find out why she did what she did and whether there was anyone else behind her making such a statement. But it appears she had done it on her own," the police official said.