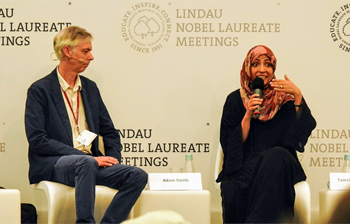 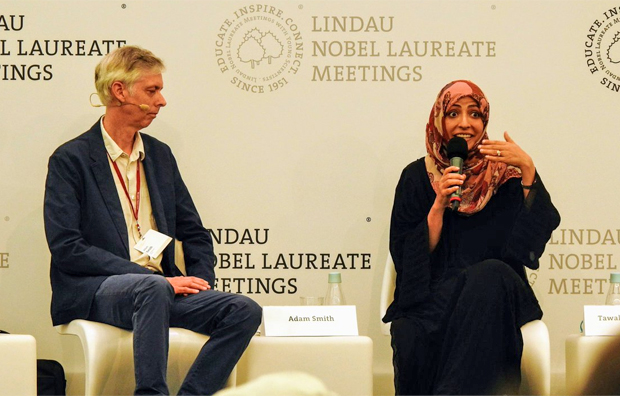 Mainau Island, Jul 9: Days before Tawakkul Karman, then 32, was to become the face of Arab Spring -- a series of pro-democracy movements that swept much of the Middle East and North Africa in 2011, shaking some of the region's longest-standing governments -- she would often think of the safety of her children.

The mother of three who worked as a journalist in Yemen -- and went on to become one of the youngest recipients of the Nobel Prize for Peace -- had been organising protests since 2007 against the "authoritarian regime" of Ali Abdullah Saleh, but in 2011, as the movement gained traction, threats to her and her family poured in.

"They arrested me, threatened me and my family and tried to kill me. When they couldn't break me, they threatened to harm my kids. But I wasn't afraid as I thought about all the kids in Yemen and what future would they have. I thought that if I give up for the sake of my three kids, it would mean betraying all the others," Karman said while addressing a gathering of Nobel prize-winning scientists and young scientists from around the world during the 69th Lindau Nobel Nobel Laureates meeting.

The threats only made her stronger and her resolve to "fight for freedom" for all of Yemen earned her the epithet 'Mother of the Yemeni Revolution'.

When she urged protesters to march to the Presidential Palace in May 2011 in a peaceful and nonviolent protest, Saleh's military killed 13 protesters.

Karman was arrested but escaped the jaws of death after an outpouring of support through letters and protests prompted her release. The incident catapulted her onto international limelight and there was no stopping her after that.

"The Yemen that I was dreaming for while growing up is the same Yemen my father told me about - a happy one. It was people's dream too which is why they flooded the streets in protest. It is a dream I still have," said Karman, who co-founded Women Journalists without Chains in 2005 to promote human rights, particularly freedom of opinion and expression, and democratic rights.

Karman believes that Yemen will transform its image of a suffering country as the Arab Spring was still alive.

"Do you think people calling for change went to the streets for fun? It was the last option for people who had been suffering for decades under the dictatorship of Saleh.

"Their voice had been suppressed. And the call for freedom spread to other countries like Egypt, Tunisia and Libya and now Algeria and Sudan," she said.

"Those in the west who say that Arab Spring will die or fail, my question to them is: Do you think the democracies that you enjoy in your countries, be it Sweden, Germany or other European countries, and were achieved by being mere spectators? The Arab Spring hasn't failed. This is just the beginning. We are still in the battle of freedom,” Karman said.

"But people in Sudan and Algeria have told them to shut up. They went to the streets to send out a clear message that people will not stop until they achieve freedom and democracy. We are telling the governments in the West, we will win our battle now with your help or later without you."

Karman said that the Nobel Prize win has been a boost to the protestors.

"Winning Nobel Prize was a big moment for me as a woman, for me as a leader, but also for our revolution since people were on the streets singing that 'we have won the Nobel prize'," said Karman.