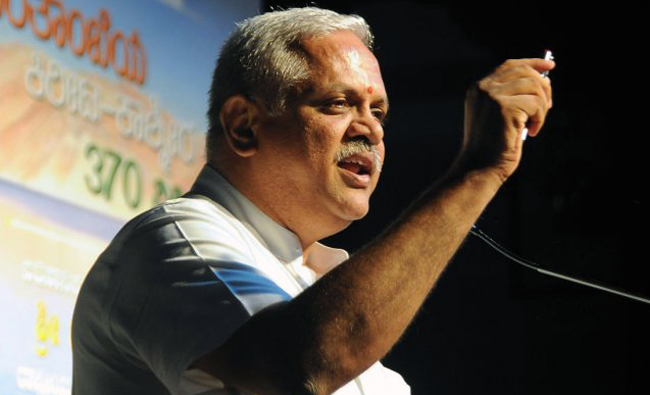 Bengaluru, Aug 24: Hinting that union government will implement the Sangh Parivar’s resolutions one by one, BJP National General Secretary (Organisation) B L Santhosh said that after the abrogation of Article 370 in Jammu & Kashmir, now the focus will be to build the Ram Mandir in Ayodhya.

Giving a lecture on the abrogation of Article 370 organised by ‘Jana Mana’ organisation here on Friday, he launched a scathing attack on former Prime Minister Jawaharlal Nehru and held him responsible for unsolved Kashmir issue.

“BJP was born to abrogate Article 370 and is growing to build Ram Mandir,” he said, at an event organised by Janamana Samithi in the city. This was not a sudden move, he said, adding that “historic blunder was corrected” on August 6.

Santhosh, who was appointed as the party’s national general secretary (organisation) last month, is the bridge between the BJP and the RSS.

Blaming first Prime Minister Jawaharlal Nehru for the ‘error’, he said that more than 40,000 people had lost their lives due to the same. In a bid to become an international leader, Nehru did not take measures to secure Indian territory, Santosh alleged.

“That is why the Indian Army is not at the international border but at the Line of Actual Control,” he said. It is disheartening to note that several places of worship mentioned in shlokas are not in the country due to such errors,” he said.

Many people have a tendency to observe such issues in a Hindu-Muslim angle. “This should not be seen with that prism as Kashmir Muslims were the worst affected by Article 370,” he said.

Claiming that both the first President of India Rajendra Prasad and Constitution architect B R Ambedkar were opposed to Article 370, he said, “We had prepared for it for the past five years. What was started with the BJP-PDP coalition ended with the abrogation (of Article 370) on August 6,” he said.