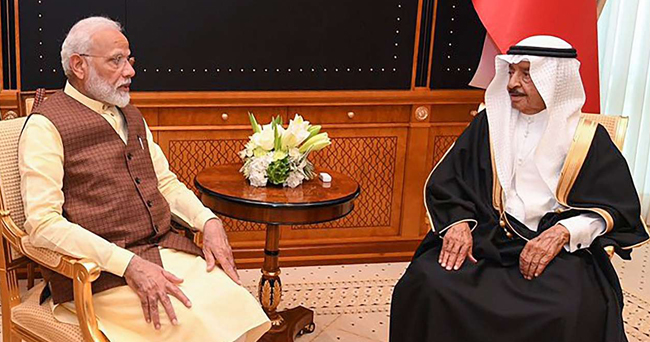 Manama, Aug 25: In a humanitarian gesture, the Bahrain Government has pardoned 250 Indians serving sentences in the country. The decision was announced during Prime Minister Narendra Modi's maiden visit to the Gulf country as part of his thee-nation tour.

Modi has expressed his gratitude to the Bahraini leadership for the Royal pardon, PMO India tweeted on Sunday.

"In a kind and humanitarian gesture, the Government of Bahrain has pardoned 250 Indians serving sentences in Bahrain. PM @narendramodi thanks the Bahrain Government for the Royal Pardon," the tweet read.

Modi's visit to Bahrain marked the first by an Indian Prime Minister to the country. During his stay, Modi held a bilateral meeting with his Bahraini counterpart, Prince Khalifa Bin Salman Al Khalifa, following which a string of Memoranda of Understanding (MoU) was exchanged in the fields of culture, space, solar energy and on the roll-out of RuPay card.