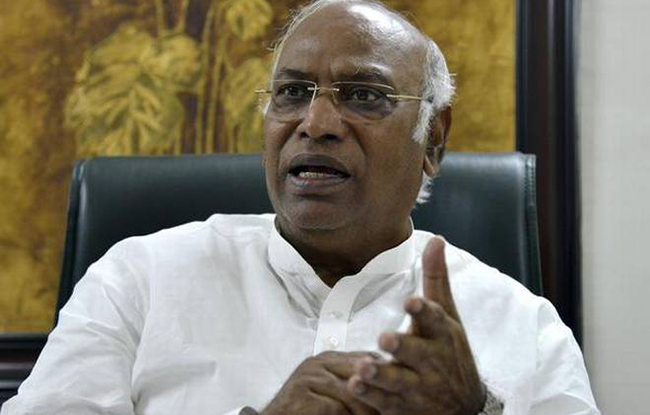 Kalaburagi, Oct 20: Claiming that there would be a “surprising result” in these Maharashtra assembly elections, Senior Congress leader M Mallikarjun Kharge on Saturday said that Balakot air strike after Pulwama helped BJP in the Lok Sabha polls earlier this year but the revocation of Article 370 will not have same impact in state polls.

Addressing the media personnel here, Mr Kharge said that out of the total 6,83,317 companies that have been shut throughout India after BJP came to power second time, over 1.42 lakh are in Maharashtra. "Farmers also expressed their anguish against Prime Minister Narendra Modi", he said adding that the Congress, NCP and CPM alliance will face the Communal BJP which shall definitely reap 'Surprising result'.

Mr Kharge also came down heavily on PM Modi during his election campaign. He said, "Mr Modi has no sense to talk. In election campaign in Maharashtra he (Mr Modi) declared 'we will not release a drop of water to Pakistan'. How is this statement even relevant to this election? ", Mr Kharge wondered.

"Voters are now very clever, they will definitely judge him", he said.

The Senior congress leader alleged that Mr Modi only talks about revoking Article 370, but never mentions what developmental works have been done in Maharashtra by BJP.

He said the BJP had abandoned its development plan which they claimed before 2014, to which people responded and they won due to it. 'They handled an excellent media political campaign", he added.