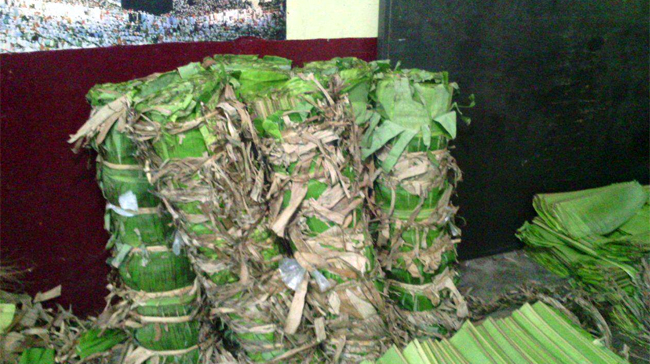 Bengaluru, Oct 2: After the central government imposed a ban on single-use plastic, banana leaf vendors in the south hope for good business in the coming days.

"The government has taken good action against single-use plastic. Plastic harm nature. By using the banana leaf, there will be less non-biodegradable waste. We are expecting some growth in our business after the ban on single-use plastic," Satish, a banana leaf vendor from Chamrajpet told ANI.

Dhanraj Naidu, another vendor also hoped that business would rise following the plastic ban. "The farmers also will receive profit from the ban. The plastic does not get mixed in the soil but banana leaves are environment-friendly," he added.

Darshini, a budget hotel, used to parcel the food items in plastic sheets and covers but now due to stringent action taken by the government, the shop has stopped the use of plastic. A board outside the hotel reads, "all sort of plastic has been banned as per the instructions of the government, customers are requested to bring box and cotton bag to carry the same."

"We now use banana leaves as it is very healthy. Plastic is very harmful, the government has done the right thing by banning it. It is even harmful to the animals," Ram, the owner of Darshini told ANI.