Bengaluru, Feb 14: A 31 -year-old Bhojpuri dancer and another girl were rescued from human traffickers after the former alerted city police on landing at Kempegowda International Airport (KIA) on Tuesday. They were to be received by a woman named Preethi at the airport. 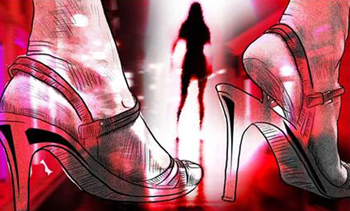 The dancer had been told she was supposed to perform a few stage shows in the city, which has a significant Bhojpuri-speaking population. But when she realised she is likely to be pushed into flesh trade, she raised an alarm.

The woman, Radha (name changed), is a mother of four children and the lone breadwinner of the family. A few months ago, Radha came in contact with a woman named Soniya in New Delhi during a dance performance. Last month, Soniya got in touch with Radha and offered to pay Rs 40,000 per month if she performed in Bengaluru.

Radha agreed and was sent to Bengaluru from Chandigarh along with the other girl. During the journey, she learnt she was supposed to do more than just perform on stage. A shocked Radha informed the Central Industrial Security Force personnel manning KIA that she feared being pushed into prostitution. KIA police were informed and the women were rescued. Preethi was arrested.